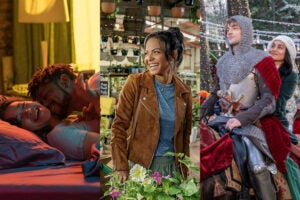 Hollywood studios have historically relied on typically cheaper and often endearing romantic comedy to fill out slates. The genre had its ups and downs during the 2000s, but studios and audiences rekindled their love affair with rom-coms over the course of the decade. Here’s a list of some of the most memorable romantic comedies from the 2010s.

“Scott Pilgrim vs. the World” (2010) There are more than a few genre-bending films on this list, but maybe none more interesting and ambitious than “Scott Pilgrim vs. The World.” This meta, cult classic rom-com co-written and directed by Edgar Wright blends rom-com tropes with comic books as Scott Pilgrim, played by Michael Cera, fights off The League of Evil Exes in order to win the heart of the girl he’s fallen for, Ramona Flowers, played by Mary Elizabeth Winstead. The film truly is singular. And in addition to Winstead and Cera, stars Anna Kendrick, Keiran Culkin, Aubrey Plaza, Jason Schwartzman, Alison Pill, Chris Evans, and Brie Larson, among others.  (Watch the trailer here).

“Easy A” (2010) Emma Stone pops up a few times on this list, but her performance in “Easy A,” might be the one that truly helped cement her as a Hollywood fixture over the course of a decade. There’s often quite a deal of overlap in rom-coms and teen comedies, as there is here. “Easy A,” also starring Amanda Bynes, Penn Badgley and Lisa Kudrow, uses “The Scarlet Letter” as it’s inspiration, while pulling slightly from such films as “Can’t Buy Me Love.” In “Easy A,” Stone’s Olive Penderghast decides to lie about losing her virginity in an attempt to up her social status, but things get out of control as classmates ask for help doing the sam and ruse gets out of control. (Watch the trailer here).

“No Strings Attached” and “Friends With Benefits” (2011) Two romantic comedies, both alike in storyline in the same year. Both films cast two two amazingly charming lead actors to carry films about two attractive people who become friends and, in order to avoid emotional feelings, decide to simply sleep together. Surprise, they end up catching feelings. The films came out months apart and similar turns of phrase associated with two friends in no-commitment sexual relationship. An interesting, but possibly low point for the genre, pointing to a dearth of ideas. “No Strings Attached” starred Ashton Kutcher alongside Natalie Portman, while “Friends With Benefits” starred Justin Timberlake and Kutcher’s now wife Mila Kunis. Emma Stone also makes a John Mayer-loving cameo. (Watch the trailers here, and here).

“About Time” (2013) This list likely wouldn’t be complete without “About Time.” The film has virtually everything you’d want in a romantic comedy, chief among them, it’s written and directed by Richard Curtis, who’s on the Mount Rushmore of rom-coms, if there was such a thing. The “Love Actually,” “Notting Hill,” and “Four Weddings and a Funeral” screenwriter imbued the time traveling rom-com with all the British charm one would expect. To boot, the film stars Rachel McAdams, which, if you want a film to ooze charm, she is a fantastic place to start. Domhnall Gleeson stars as a man who’s able to travel back in time and uses this strange family gift throughout his life as he falls in love with McAdams’ character. (Watch the trailer here).

“Crazy Rich Asians” (2018) “Crazy Rich Asians” broke down cultural barriers and was a box office it. With a virtually all-Asian cast audiences latched on the film, which was only the fifth romantic comedy to gross more than $100 million at the box office since 2009. The film was adapted from the best-selling book series by Kevin Kwan. (Watch the trailer here).

Isn’t It Romantic? Inside the Resurgence of the Beloved Rom-Com

Shraddha Kapoor REVEALS how she chose studies over working with Salman...