Bollywood actress Karima Kapoor is known to share throwback Thursday pictures for her fans on social media. But what do you do when you are locked inside your house amid coronavirus widespread? You share these pictures on Friday as well and this is what she did by sharing a blast from the past picture. It included her in her early teenage years along with her sister Kareena Kapoor Khan and other members from her extended family–not to forget young Ranbir Kapoor. She is seen standing behind grandfather actor-filmmaker Raj Kapoor who on hi lap has the other two kids, also including Riddhima Kapoor.

Sharing the same on Instagram she captioned it as, “Family matters..#grandparents #cousins #family #love @kareenakapoorkhan @riddhimakapoorsahniofficial #ranbirkapoor #flashbackfriday.” The same photo was also shared by her sister on the photo-sharing app with a caption that read, “We’ve discovered the OG posers of the Kapoor family.” Have a look:

Meanwhile, guess who recognized who’s who? Yes, it’s Alia Bhatt who couldn’t stop herself from commenting on the picture that featured her boyfriend as well! Check out how she reacted on the same: 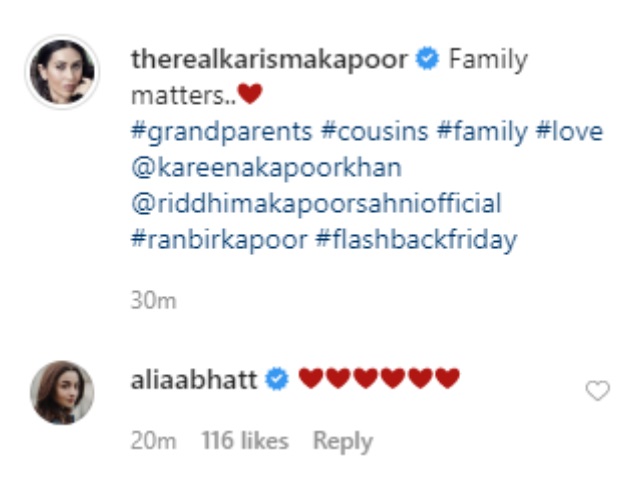 Meanwhile, all three actresses have previously announced their contribution to the PM Relief Fund and Maharashtra CM Relief fund. Check it out:

On the work front, Alia and Ranbir will next be seen in Ayan Mukherji’s Brahmastra, Karisma made her comeback through web series Mentalhood while Kareena who was last seen in Angrezi Medium will next be seen opposite Aamir Khan in Laal Singh Chaddha.

James Gunn Has 10 Movies for You to Stream While Locked...