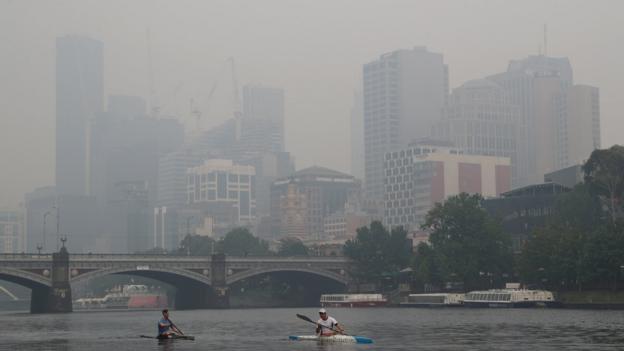 Training at the Australian Open was temporarily suspended on Tuesday, and qualifying was postponed by an hour because Melbourne's air quality was affected by persistent bush fires.

The organizers said conditions should improve and were "constantly monitored".

An estimated 10 million hectares (100,000 square kilometers) of land have been burned since July 1 at record temperatures and droughts.

At least 28 people have died.

"Further decisions will be made based on the local data and in close consultation with our medical team, the Bureau of Meteorology and scientists from EPA Victoria," said a statement on Twitter.

"As always, the health and safety of our players, our employees and our fans is our top priority."

The tournament starts on January 20th.

On Monday, the International Tennis Federation, Wimbledon, and the US and French Open donated $ 400,000 (£ 308,000) for Australian bushfire relief efforts.

Some players have already pledged personal donations for relief efforts as part of the # Aces4BushRelief campaign, while the ATP donates GBP 383,000.

Serena Williams donated her earnings after winning the Auckland Classic, and along with Rafael Nadal, Roger Federer and local favorite Nick Kyrgios, she will be participating in the Rally4Relief exhibition in Melbourne on Wednesday to raise money for the Australian Open.

Former Australian cricketer Shane Warne raised over £ 500,000 by auctioning off his baggy green hat, and he and former Australian captain Ricky Ponting will defeat the opposing teams in a special Twenty20 game on February 8th.