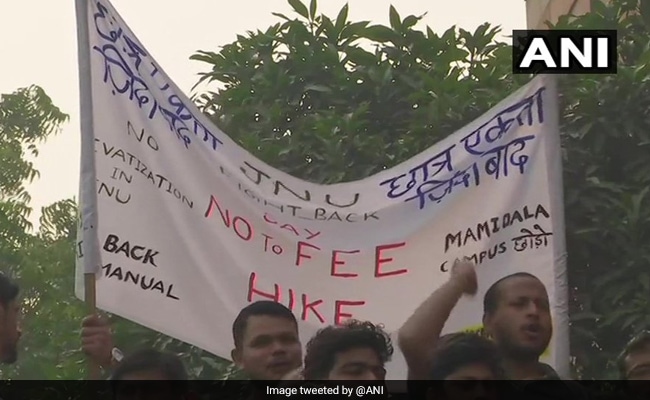 The JNU student association has accused the administration of forcing students to pay higher fees before enrolling for the winter semester, despite the JNU announcing a major rollback after massive protests against a November fee increase. In a series of tweets posted on social media last night, JNUSU said that "some students are ready to register after the rollback by paying unchanged tuition fees", only to find that the university is the one Blocked payment … until they pay increased fees ".

The JNUSU allegation comes just days after Vice Chancellor Jagadeesh M Kumar told Ministry of Education officials who had negotiated the major rollback that "all of the recorded discussions have been fully followed (and are being carried out)".

"Although some JNU students tried to show their willingness to register after the rollback by paying only the unchanged tuition fees, the administration has now suddenly blocked the payment of fees for the rest of them until they see the increased fees in the illegal IHA manual pay, "read the JNUSU tweet.

"… Students with pending requests have been academically suspended even before the request process is completed. This is an obvious disregard for the goodwill gesture. Therefore, students do not pay fees / enrollments. We do not compromise until this fraudulent VC is removed "read the second tweet.

Although some JNU students tried to show their willingness to register after the rollback by paying only the unchanged tuition fees, the administration has now suddenly blocked the payment of fees for the rest of them until they pay the increased fees in the illegal IHA manual , (1/2) #VCHataopic.twitter.com/R1erOMZF31

Students with outstanding inquiries were excluded from studying before the inquiry process was completed. This is an obvious disregard for our goodwill gesture. Therefore, the students do not pay any fees / enrollments. We don't compromise until this fraudulent VC is removed. (2/2)

On Sunday, a Twitter account, apparently owned by JNUSU Vice President Saket Moon, made similar claims. A screenshot of the university's fee portal shows the message: "You cannot register for this semester … Academically suspended from the Chief Proctor Office".

This is the portal where I am supposed to pay my registration fees. It shows that I was blocked academically without a request or a reason for the exhibition. This is not just a reason to remove the vengeful @ mamidala90 from the post of JNU VC?#VCHataopic.twitter.com/VPrDLvDY3W

The JNUSU claims go back to what the Vice Chancellor said last week. he seemed to offer an olive branch to protesting students when he called for a "fresh start".

Hundreds of JNU students took to the streets in the last three months of last year to protest the increase in dormitory and utility fees. The students said the increase – around 300 percent – would "affect an overwhelming number of students."

After the massive agitation that included violent clashes with the Delhi police, the university offered a partial rollback for BPL students (below the poverty line).

However, the protesting students, led by left-wing student groups, have refused to back down and demanded a full rollback.

The JNU administration blamed this stalemate for the violent mob attack on students and faculty on January 5 that injured 34, including JNUSU President Aishe Ghosh – an attack that both the Vice Chancellor and the police have committed received violent criticism from Delhi.

Sections of JNU students and faculty members, as well as seasoned BJP chairman Murli Manohar Joshi have pushed for the vice chancellor's resignation, but the government has yet to adhere to it.