In recent years, smart speakers have really established themselves as a category – at least internationally, if not even in India – and smart displays are the next development in this area. These are devices that offer the same functions as intelligent speakers. However, by adding a screen, they can provide a visual context for some of their answers and open up additional use cases.

We saw a number of smart devices with displays, such as the Amazon Echo Show with its huge 10-inch display and the smaller sister of the Echo Show 5. Some devices position themselves as digital clocks, such as the 4-inch Lenovo Smart Clock and the Amazon Echo Spot. We have the Google Nest Hub with us today, which Google positions as a digital photo frame, although it competes with everything else we mentioned as an intelligent display. Does this device deserve a place in your home? Let's find out.

In contrast to Lenovo Smart Clock and Amazon Echo Show 5, which look like individual, continuous parts, the Google Nest Hub resembles a tablet that is attached to a wedge-shaped base. This reduces the overall space requirement of the device and means that it can be accommodated in confined spaces, e.g. B. on a narrow tabletop. Still, it doesn't look as elegant as the other two devices.

With a screen size of seven inches, this display is located between the Lenovo Smart Clock and the larger Amazon Echo Show. The result is a screen that is large enough to be visible from a room without taking up too much space on a table. The wedge-shaped base on the back has the fabric coating that we use for products in this category. The display has fairly thick frames on all sides, which we saw in the entire category.

The top bezel houses a striking ambient light sensor (which looks very similar to a camera, but isn't one) with two microphones on either side. Directly behind this sensor is a physical switch for switching the microphones on and off. This positioning makes this button more accessible than the one opposite the Lenovo Smart Clock.

The physical volume control buttons are on the back right (if you reach from the front) and are also quite accessible, although we would have preferred to have them at the top. The power input is the only connector on the base of the device. There is no USB port like the Lenovo Smart Clock, and it would have been nice to have one to charge our phone. 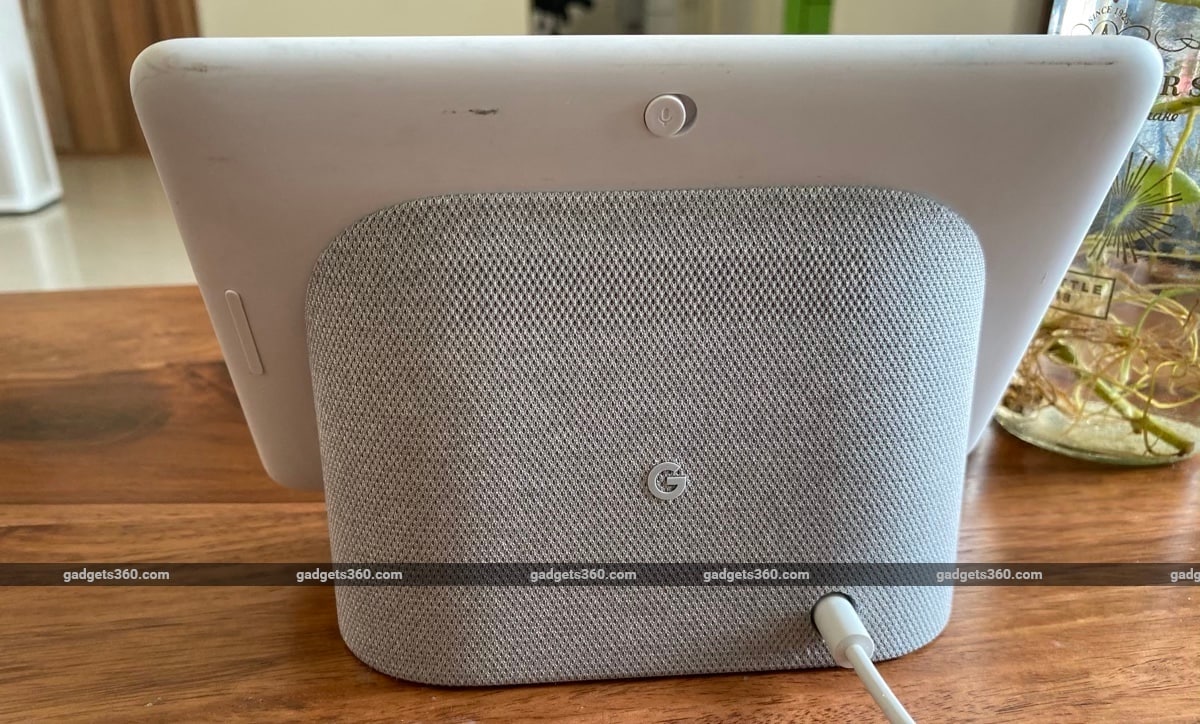 Getting into the device is relatively easy and is done via the Google Home app. Follow the instructions and you will be up and running in no time. As mentioned earlier, Google positions this device as a digital photo frame. So instead of a clock face, you can select a “photo frame” that is displayed when the device is inactive.

The standard photo frame circles your “best photos” from Google Photos. However, you have the option of specifying a custom album (including shared albums) as the source. Other photo frames include the Art Gallery (with a selection of different themed photos that Google has collected from various sources) and Experimental, which you can use to link your device to Facebook or Flickr for the time being. Alternatively, you can opt for a full-screen clock with eight different dials.

During setup (or later), you can enable Voice Match, which allows multiple people to use the device, and provide customized answers to questions such as "What's on my calendar?" Receive. We tried this with a couple of users and it worked as advertised during the time we spent with the device.

If you use anything other than one of the full-screen watch faces, the time and weather are displayed in the lower left corner of the screen. However, you can deactivate both if necessary. You can swipe left or right to scroll through the photos if you don't like the photo at any time. You can use the app to control the time after which the device automatically loads the next picture.

Swiping down from the top gives you quick access to the home screen, which gives you access to custom routines, media, and other smart home devices that you may have connected to your Google account. Routines, of course, give you the ability to trigger multiple actions with a single phrase. For example, you could have a morning routine that sets your lights, tells you today's weather, news, commuting, etc. if you say "Ok Google, good morning".

Swiping from the bottom up gives you quick access to options such as brightness, volume, do not disturb, alarms and settings. However, most of the important options need to be controlled through the Google Home app. When you swipe in from the right edge, you'll see additional maps that are known to most Android users and all users of the Google app on iOS. For example, in the morning, you may see a map that shows how long Google is likely to take to go to work. Additional maps for YouTube Music, YouTube and other suggestions for trying out in the Google Nest Hub are also available.

Maps in the Google Nest Hub

You can touch any card to view it in full screen mode, view more details, or trigger an associated action. For example, if you tap a video on the YouTube map, it will play in full screen mode. You can swipe in from the left edge at any time to return to the previous screen. Doing so from the photo frame will bring you to a boring digital clock with white text on a black background, even if you first use the full-screen clock frame.

The card-based user interface makes sense, and our only complaint is that, like other smart speakers, prompts and warnings are only triggered by user actions. Google has done an excellent job with its card-based notifications on Android and in the Google app on iOS, and proactively presented information such as the commute times when needed. However, this is not the case here.

When smart speakers made their debut, it made sense that they didn't have proactive warnings because no one wants a device to present information arbitrarily, no matter how critically it thinks it is necessary. However, smart displays are not required to mimic the behavior of smart speakers in this regard, and it would be great if the cards were presented as needed without screen wiping or voice commands. 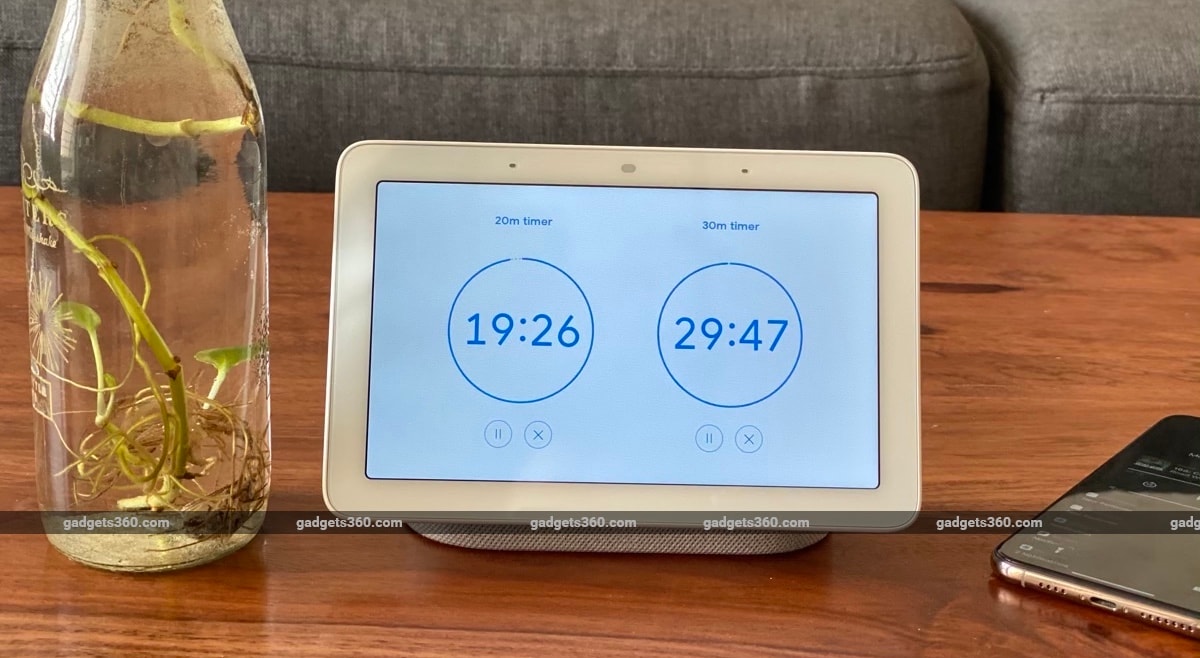 The screen also helps with other contextual tasks. For example, if you set a timer, a countdown will appear on the entire screen. A ring around the countdown shows the remaining time and the pause and cancel buttons on the screen. This can be rejected with swipe gestures without canceling the timer. However, we found it useful to see the current position of the timer without having to ask the voice-based assistant.

The screen also enables improved integration with smart home devices in some scenarios. For example, you can view feeds from compatible smart home cameras with a voice command on the Google Nest Hub screen. We tried this with a Mi Home Security camera and it worked as expected.

We also liked to see the occasional YouTube video on the display. You can do this by prompting Google Assistant on the device to play a specific function from YouTube. If an exact match is not found, relevant search results are displayed and you can choose one that you like.

Unfortunately, you cannot watch videos from Netflix (such as "According to Google Assistant, Netflix cannot be played on smart displays") or any other source. However, you can transfer videos from your phone to the Google Nest Hub like you would on any TV connected to Chromecast.

Watch a YouTube video on the Google Nest Hub

Audio becomes so loud that it can be played in a room, whether you are watching videos or listening to music. The speakers aren't particularly good in terms of fidelity, and the overall sound performance isn't all that different from what you'd get with a Google Home mini.

As already mentioned, the Google Nest Hub has an ambient light sensor that automatically controls the brightness of the display. This worked pretty well, and we never had to adjust the brightness manually. When the room is dark, your picture frame is replaced by a giant digital clock, and the display is so dimmed that it no longer distracts, even though time is still visible from a distance.

You can't make video calls without a camera, but audio calls are supported through Google Duo. Although Google Assistant now supports Hindi on smart speakers like Google Home, this has not yet been extended to smart displays like the Google Nest Hub, which potential buyers should take into account.

We really liked the Google Nest Hub as a product, although we've noticed since its launch that smart displays still have a long way to go before they really become smart. At the moment, these are only intelligent loudspeakers that can offer some answers an additional visual context without realizing the full potential of the display. Perhaps this is why Google is marketing this product as a "photo frame" rather than a really intelligent display.

We can see that this product is useful in some contexts, such as in kitchens to watch recipe videos, or in halls as well as in a digital photo frame, but it – and indeed various other products in this category – are not real suitable Clever. One can only hope that the next generation of products will be an improvement in this regard.