Voice assistants made it to our phones and to our homes. If you have an Android smartphone, you are probably already using the Google Assistant. Google designed the Home Mini and Home as stand-alone devices with an integrated Google Assistant. In this way, users could interact with the Home Mini and control other devices such as Smart Lighting or Smart TV. Amazon has also introduced Alexa-powered smart speakers that compete with Google for a place in your home. To keep up to date, Google has renamed the home lineup under its Nest subsidiary. The second generation Home Mini is now known as the Nest Mini and has been updated. It's comparable to the 3rd generation Amazon Echo Dot, but is it spoiled for choice to stay on top? We check it out to find out.

Google has kept the Home Mini's core design, but made a few minor changes. At first glance, it is almost impossible to distinguish between the old Google Home Mini and the new Nest Mini. Google could have given it its own design, as Amazon did for the Echo Dot 3rd Gen.

The loudspeaker still has a fabric top made from recycled plastic bottles. Google offers the Nest Mini in four color options: chalk, coal, coral and sky. We had the Coral colorway for this test. The capacitive controls for this speaker are hidden under this fabric layer. There are four LEDs that light up when you turn on the device and launch the Google Assistant. 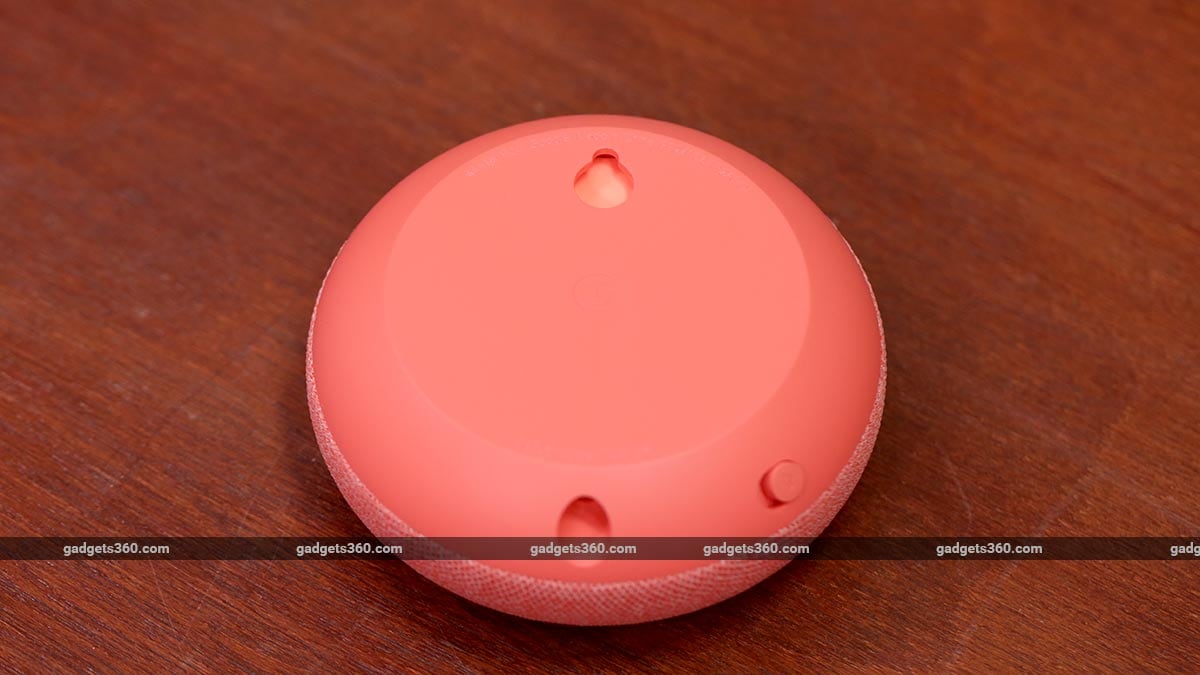 Just like the old Google Home Mini, the play / pause button is in the middle. The volume buttons are on both sides and are now illuminated so that they can be pressed more easily. These buttons light up when you put your hand near the device and stay away for the rest of the time to give it a clean look.

There is a switch on the side that can be used to deactivate the device's microphones. Google has switched to a DC connection socket compared to the micro USB connection of the Google Home Mini. So you can power the original Google Mini from a power bank, but not for this model.

It is interesting that the Google Nest Mini now has a recess at the bottom in which you can attach the device to a hook or hook on the wall. Unlike most other smart speakers that are on a flat surface, you can place the Nest Mini on a wall instead, although its power cord will then dangle down.

The Google Nest Mini has a 40mm top firing driver similar to the older Google Home Mini design. Google now offers three far-field microphones, which are an upgrade from the predecessor's two-microphone array. There is support for dual-band WiFi and Bluetooth 5. The device also has a built-in Chromecast function, which allows you to transfer music or videos directly to a Smart TV or any device with a connected Chromecast dongle. The Nest Mini has a quad-core 64-bit ARM CPU running at 1.4 GHz, but Google hasn't released any brand or feature details.

The Nest Mini can be fully controlled with just your voice. The three far-field microphones recorded our voice without any problems. It also supports Voice Match technology, which can be used to identify the person who is asking questions or issuing commands and responding in an individualized context. 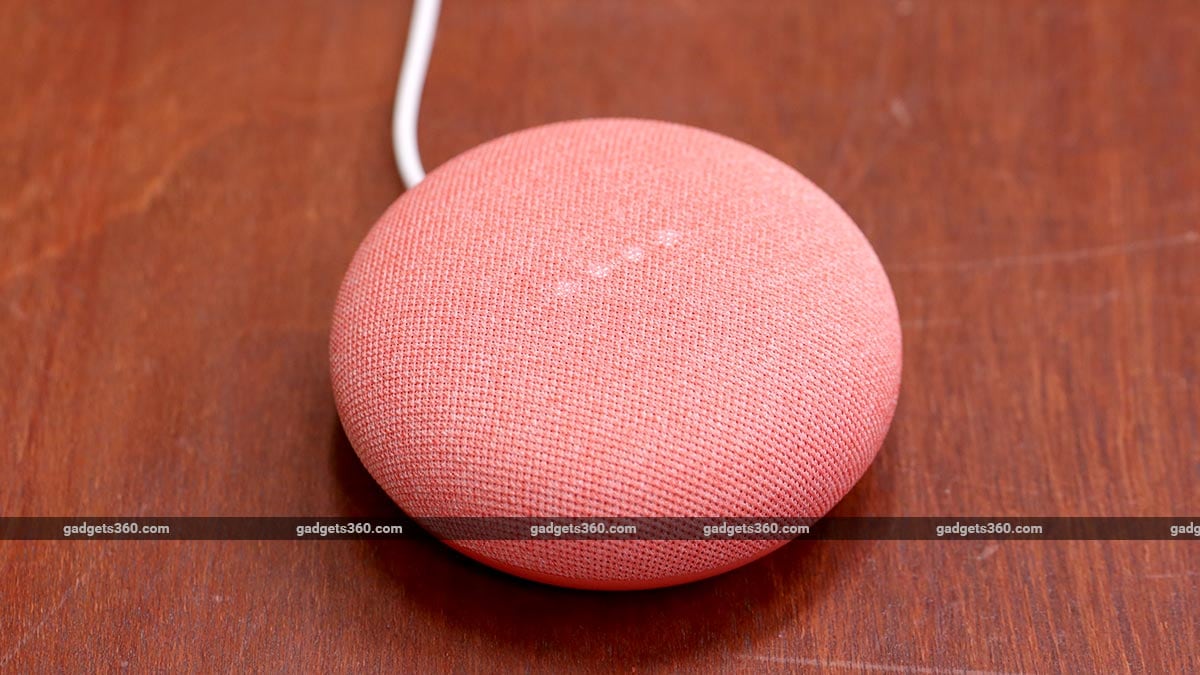 With the fabric top, Google Nest Mini fits perfectly into your home decor

With the help of our voice, the device was able to recognize us and call up details from our calendars. It could also add entries to our calendar and give us navigation directions to the place we asked for. That's not all, it can also send navigation instructions directly to a user's Android smartphone, which is a nice touch. Continued Conversations is the name for the way Google can conduct a conversation with the Google Assistant without having to use the activation phrase "Ok Google" for every further question asked.

You can link your YouTube Music, Google Play Music, JioSaavn, Spotify, Gaana, and Wynk Music streaming accounts and tell Google Nest Mini which account to use to request a song. The Google Assistant also offers some voice-based games, such as B. Quiz games that you can play with this speaker. However, the options are limited and you can't add new skills like you can with Amazon Echo devices.

A short "Ok Google" command is enough to wake up the device. We did not notice any significant delays in waking up the device from idle. Speech recognition is quite good and can precisely capture our commands even in a crowded room. Thanks to Voice Match, the Nest Mini can recognize the person speaking and return personalized answers such as appointments from the calendar. However, the overall functionality of the device is severely limited to the capabilities of the Google Assistant.

With Google Nest Mini we heard a lot of music and played a few quiz games. We found the new Nest Mini louder than the device it is replacing. The audio quality has also improved and the speaker doesn't sound very thin. 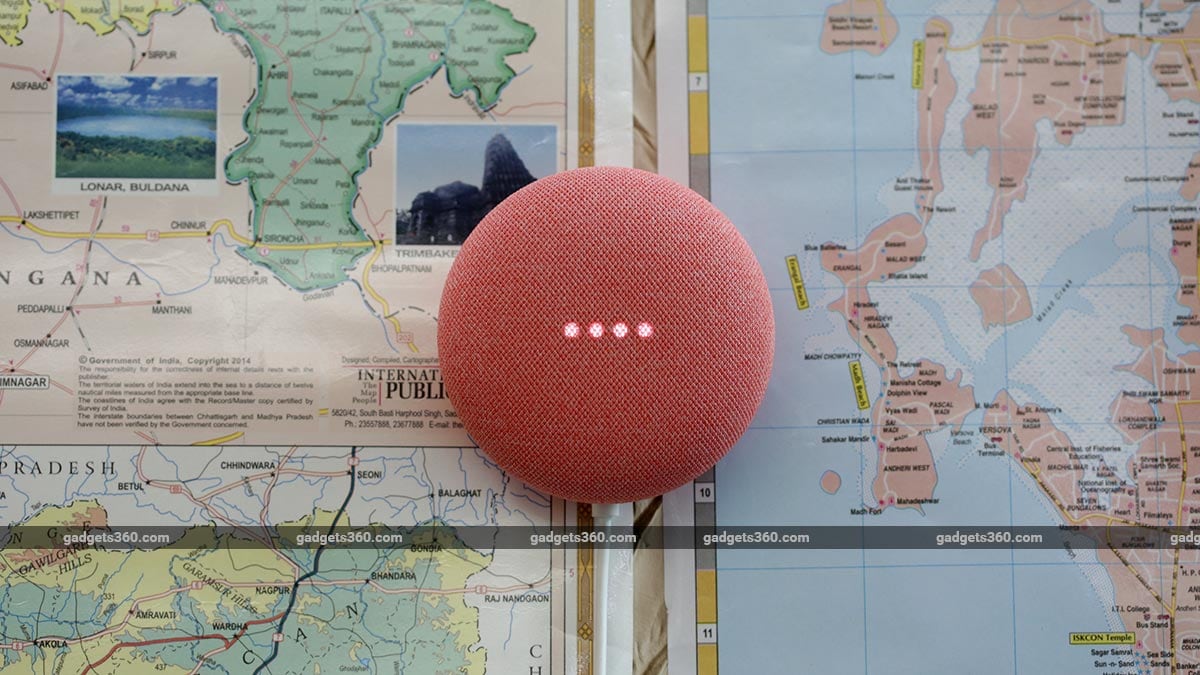 You can mount the Google Nest Mini on the wall, but the power cord dangles

At lower volumes you will notice a certain bass, which makes the sound a bit richer, but at higher volumes this is completely missing. In fact, it is not pleasant to hear the Nest Mini at full volume as the highs overwhelm the mids and the bass almost disappears. We have limited ourselves to playing music at a lower volume.

The Google Nest Mini doesn't have a 3.5mm audio jack, so you can't connect external speakers directly to it. However, you have the option of connecting it to a Bluetooth speaker for better sound quality. When we tried this, the Nest Mini intelligently used the paired speaker only for music playback, while still using its own internal speaker for the Google Assistant responses.

The Google Nest Mini costs Rs. 4,499 in India and is a mild upgrade over the Google Home Mini in terms of audio quality and speech recognition. Google has made wall mounting possible, which is the biggest physical change.

If you already have a Google Home Mini, it's not worth replacing it with a Nest Mini. However, if you want to buy a new smart speaker, you should definitely consider the newer model. The audio quality isn't the best, but smart speakers at this price don't sound good anyway. The Google Assistant is characterized by excellent speech recognition and integration into the Google ecosystem.