Microsoft recently deleted the internal EdgeHTML browser engine and switched the Edge browser to Google's Chromium engine to join Vivaldi, Opera and Brave. Switching to the Chromium engine was good news for Edge fans. Among other benefits, they now had access to the Chrome Web Store’s extensive extension library. It was a win-win situation for Microsoft, Google and especially for users. Well, apparently not so much. Google has warned Edge users that Chrome is the safer browser for installing and using extensions from the Chrome Web Store.

The Chrome Web Store, first recognized by WindowsLatest, now displays a warning when users try to install an extension in the Chromium-based Edge browser. The warning message appears as a banner directly below the URL field and reads: "Google recommends switching to Chrome to use extensions safely." However, this is just a warning that users can ignore or accept. If you are in the Edge browser and the warning message appears, you can still download the compatible extensions from the Chrome Web Store with ease. 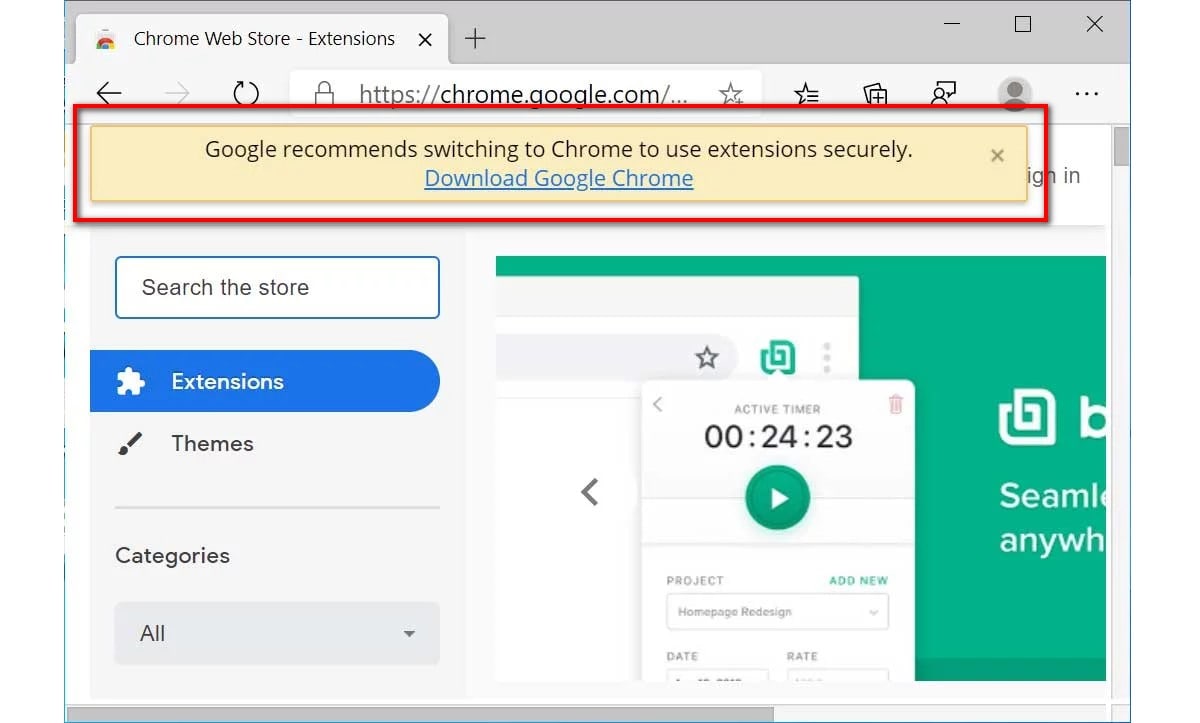 This is the warning message that the Chrome Web Store displays to users of the Edge browser
Photo credit: Bleeping Computer

The warning banner also includes a link to download Chrome and use extensions "more safely". Interestingly, Google doesn't scare users trying to install an extension in other Chromium-based browsers like Vivaldi and Brave. It appears that Google is checking the UA (User Agent) string to identify the brand and build of the browser, and is highlighting Edge to display the warning message. If you don't know, the user agent is essentially a web browser ID that specifies the name, version of the browser, and the operating system it is running on.

However, the user agent can also be used to selectively display content to users or to influence the behavior of a website based on the browser used. Google itself states in its Chrome developer blog that the user agent can be used to "adapt behavior or content to specific browser versions". While that sounds benevolent, there is also an ugly story behind his abuse. It appears that despite switching from Edge to the Chromium engine, Google still presents its own Chrome browser as a better option. How exactly Chrome is "more secure" for installing extensions compared to Chromium-based edge browsers is still a mystery.

Of course, Microsoft isn't blameless even in a browser war. In the past, the company warned Windows 10 users against installing other browsers to launch Microsoft Edge menu advertising, besides Edge being set as the default browser on Windows computers.

Poila Baisakh 2020: meaning, meaning of the Bengali New Year and...