Many new portable devices have appeared on the market in recent weeks, including new models from well-known brands such as Lenovo, Xiaomi and Honor. The Honor Band 5 is one such product and the latest version of the popular Honor Band series. This new fitness tracker has an AMOLED display and can track both sleep and heart rate. It is also waterproof up to 50m. The Honor Band 5 competes with the Xiaomi Mi Smart Band 4 and has the same price as the Rs. 2,299. Which fitness wearable should you choose? We put Honor Band 5 to the test to find out.

Honor hasn't changed the design of this device at all compared to its predecessor. The Honor Band 4 that we tested earlier this year was also similar to the device it replaced. Honor offers Band 5 in three colors: Meteorite Black, Coral Pink and Midnight Navy. We had a Meteorite Black unit for review. Honor's latest fitness band looks like a one-piece device, but the straps can be separated from the main part. You can switch to different straps and we found some color options online.

The bracelet supplied with the Honor Band 5 is made of high-quality silicone and has a watch clasp. This makes it easier to carry the device and less likely to come loose. We didn't notice any unusual signs of wear and tear on the tape when we tested it over the course of a few weeks. 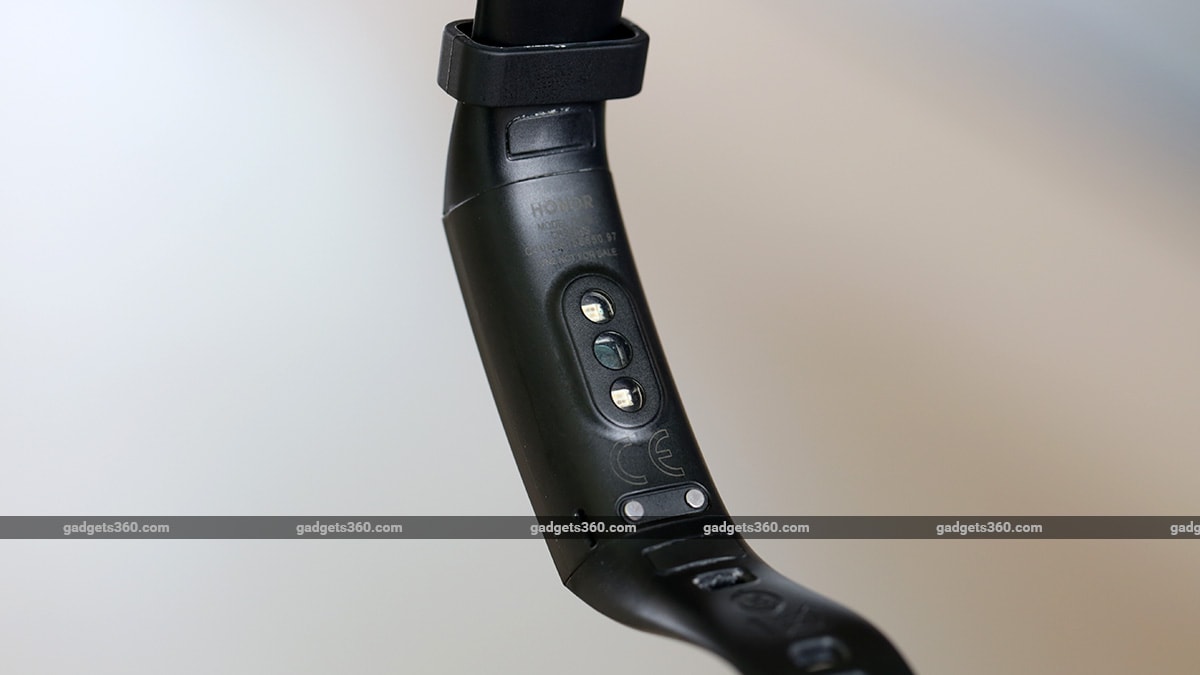 Heart rate tracking mechanism on the back of Honor Band 5

The core of Honor Band 5 contains a 0.95-inch AMOLED touchscreen with a resolution of 120 x 240 pixels. There is a capacitive home button directly below the display. Like Honor Band 4, Band 5 also has a color display. Although this feature sets Band 4 apart from the competition, it is no longer unique, as there are also devices like Mi Smart Band 4. This AMOLED panel becomes bright enough outdoors, and you can choose between five brightness levels on the band itself.

On the back you will find the hardware for heart rate measurement. This sensor protrudes very easily, but is not uncomfortable when wearing the band. There are two charging pins, but a proprietary clip-on charger is required. This charger has a micro USB connection. Honor also comes with a short cable that you can use to charge the device.

Since the Honor Band 5 has a touchscreen, you have to swipe your finger across the user interface to navigate through it. You can tap the screen to make a selection and swipe right to return. Tapping the capacitive button takes you to the start screen. Honor Band 5 also has several dials to choose from. Each dial shows different types of information. When you tap a face, the connection status and battery level of the device and the current weather are displayed. 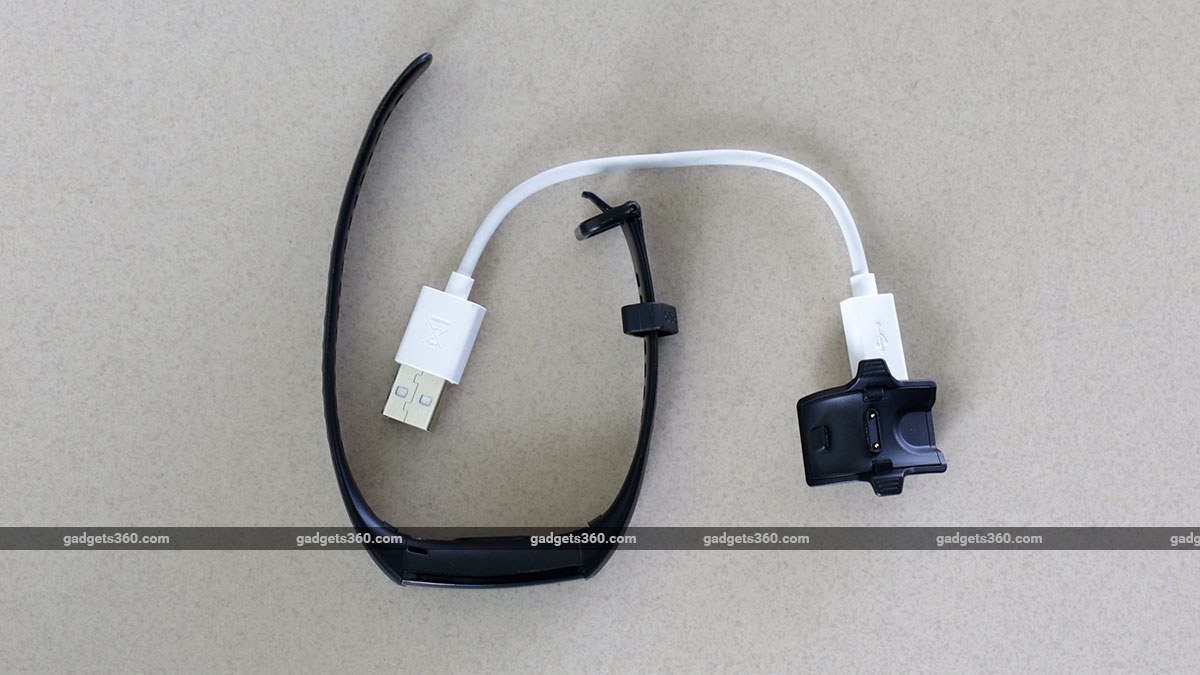 The Honor Band 5 has a simple, user-friendly interface and shows you the number of steps, your heart rate, sleep duration, training details and notifications. Band 5 also buzzes to remind you to move when you haven't been active for a long time. This is a very useful feature. The Workouts tab offers nine training options, including a free training mode. While it would be too much to expect more detailed and specific workout tracking like the Samsung Galaxy Watch Active (Review), the Honor Band 5 allows you to track and swim runs both indoors and outdoors. A new update also added music controls and SpO2 (Blood oxygen content) tracking.

Honor made Volume 5 swim safe and added the ability to track swimming movements, which we were unable to test in this test. However, we had the band for over 15 days and they survived our daily showers.

You must use the Huawei Health app to pair Honor Band 5 with a smartphone. The app is available for both Android and iOS. We used tape 5 with a Google Pixel 3 (review) for the duration of this review. The pairing process is very simple. Once set up, the smartphone can send notifications to the tape. This app also shows you information such as the number of steps, your heart rate and how long you slept, among other things.

The Huawei Health app has a permanent notification stored on our Pixel 3. While this was annoying, the app needs it to maintain a constant connection to the band for push notifications. The battery life of our smartphone has not changed noticeably. 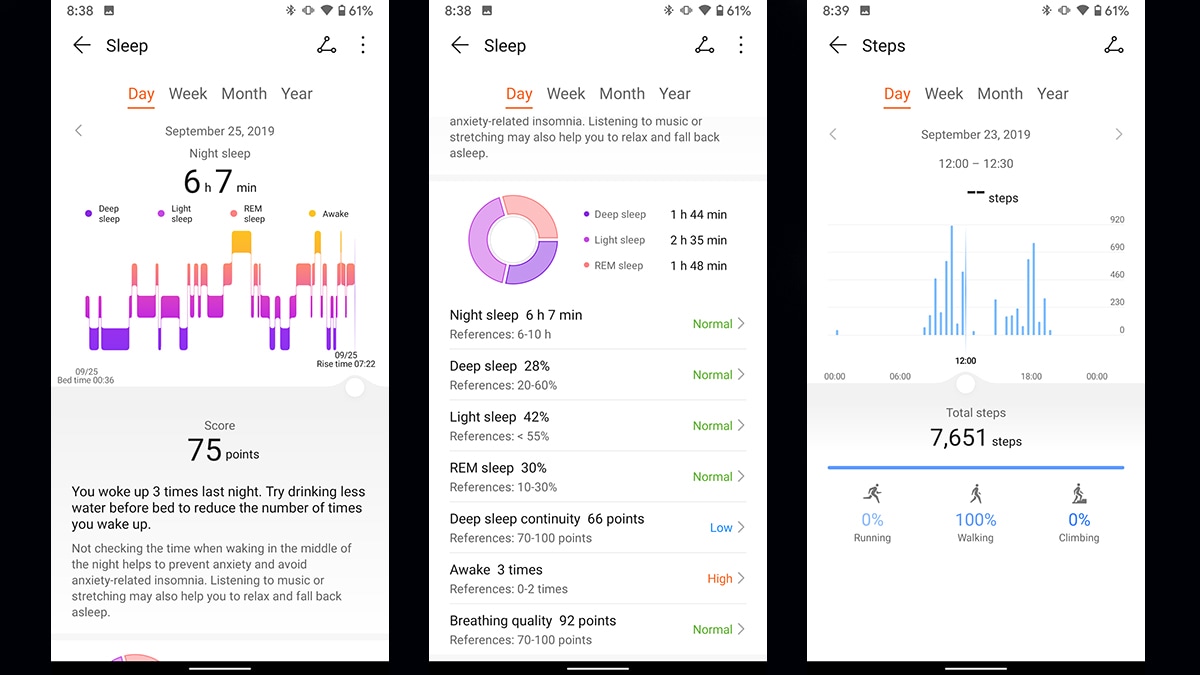 The app also tracks steps using the smartphone's sensors, regardless of the steps recorded by the band. We noticed that the pedometer in the app is inaccurate because it constantly counts steps while riding a motorcycle. We tested the accuracy of Honor Band 5 by counting 1000 steps while walking and it recorded 990 steps, which is good. We found the tracking to be accurate enough to rely on. In contrast to Honor Band 4, the pedometer did not record any steps while driving.

In order to check the accuracy of the distance measurement of Honor Band 5, we covered a distance of exactly 1 km. Honor Band 5 recorded the distance at 1.06 km, which is acceptable given the fact that there is no native GPS functionality. If you don't want to train professionally, this accuracy is probably sufficient.

Sleep tracking was also reliable. Honor Band 5 not only shows the duration of your sleep, but also divides it into deep sleep, light sleep, REM sleep and awake periods. The Health app uses Huawei's trusleep algorithms for tracking. Different sleep times are also classified, and the app gave us tips on how we can improve the quality of our sleep. The smartband also has a vibrating alarm function that wakes you up. We had to experiment with the app to set an alarm. We would like to have it set by the band itself

The Honor Band 5 is able to continuously monitor the heart rate and has two modes to choose from. Smart mode automatically adjusts the frequency of measurements to your activity level. The other mode is real time, which is constantly tracked. The latter places higher demands on the battery of the Honor Band 5. We compared the heart rate values ​​with those of an Apple Watch Series 1 and a Samsung Galaxy S9 Plus (test) and found that they are all in the same range. We also tested our SpO2 Level with the band and found that the measurements differ slightly from those of a Samsung Galaxy S9 Plus. 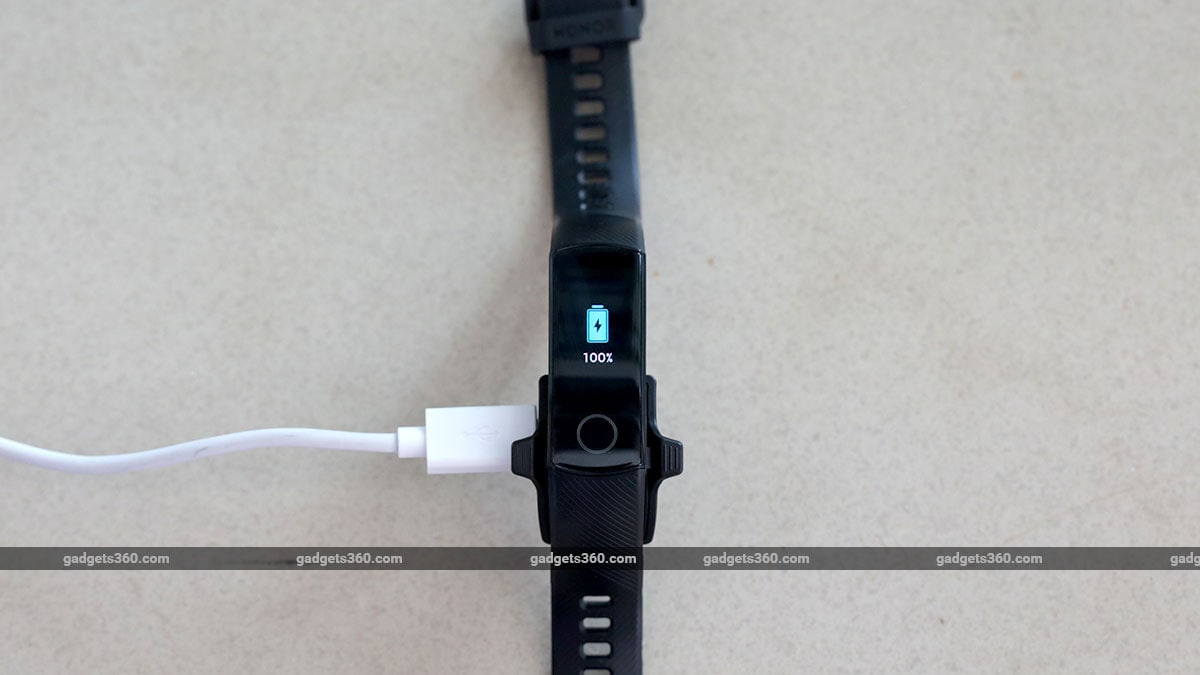 Volume 5 takes just over an hour to charge

Honor claims that Band 5 has the same battery life as its predecessor, i.e. H. 14 days. However, based on our experience with the heart rate monitoring set to Smart, activated notifications for calls and WhatsApp and activated TruSleep sleep monitoring from Huawei, the band only lasted a full week. We also did another battery test by switching the heart rate measurement to real time and leaving the other settings unchanged. This reduced the band's battery life to just over three days. The proprietary charger took just over 1 hour and 20 minutes to fully charge the tape.

Honor Band 5 is an incremental upgrade from Band 4, which it replaces. Honor has retained all the positive features of the previous model, e.g. B. the exact sleep tracking and the bright AMOLED display, and the device is now made swim-proof It also has the ability to track swimmers, which was missing from the previous version. However, the battery life is still the same and this could have been improved. You'll also need to carry the proprietary charger around gently. Price at Rs. 2,299, the Honor Band 5 doesn't go wrong and is a solid alternative to the Xiaomi Mi Smart Band 4.

Why startups borrow more venture than VC dollars near all records