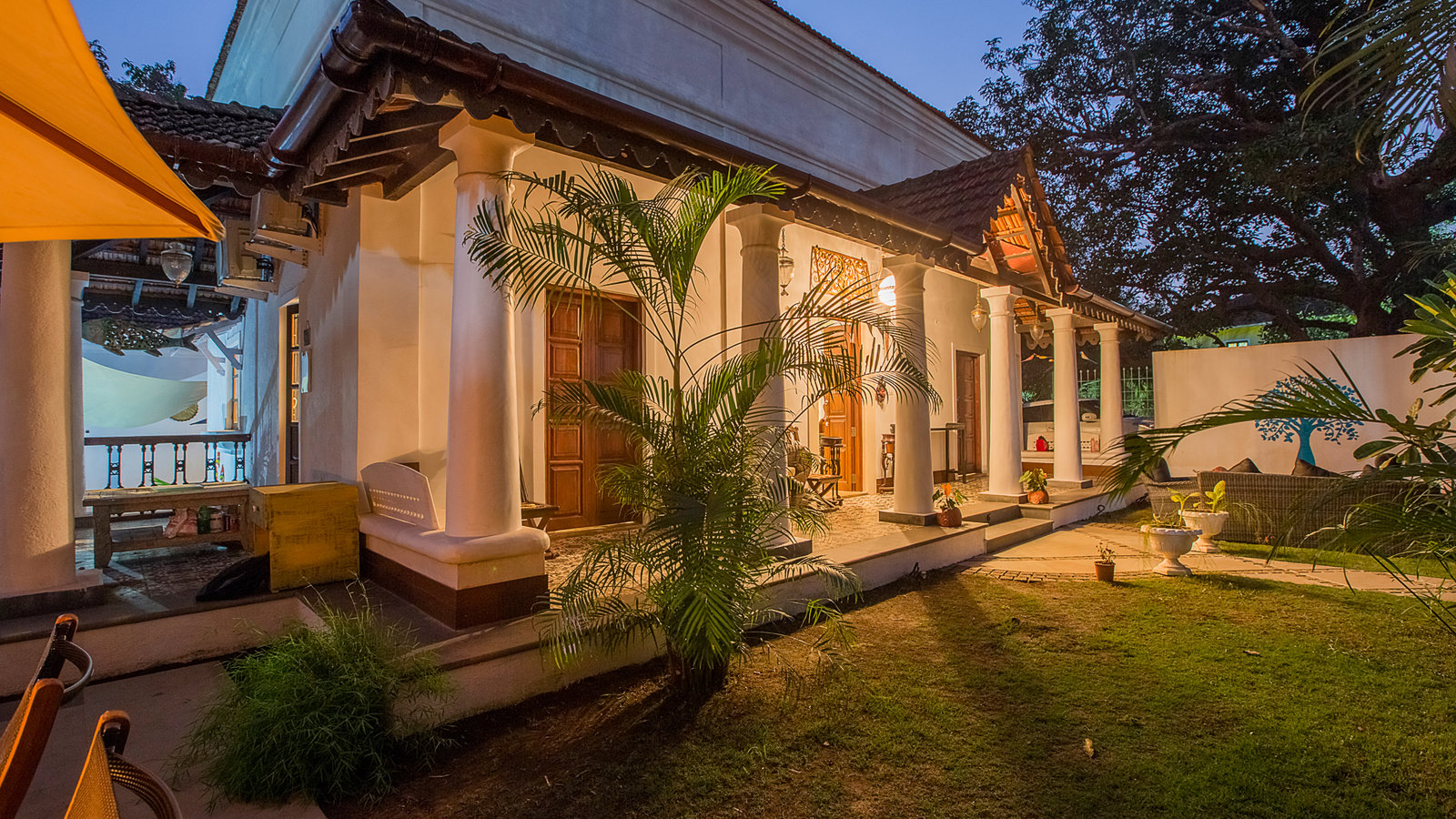 A Portuguese Villa on the Indian Coast

This three-bedroom, Portuguese-style villa is in Goa, a small, tourist-friendly state in southwestern India known for its colorful architecture, historic houses of worship and white-sand beaches on the Arabian Sea.

The Portuguese Empire ruled Goa for more than 400 years before India annexed the land in 1961, and many home designs retain the Portuguese influence, as does this property with its veranda, columns and red roof tiles. “This villa is very unique and a good buy because of its old Portuguese character, beautiful interiors and proximity to Candolim beach,” said Atul Goyal, the senior vice president of India Sotheby’s International Realty, which has the listing.

Mr. Goyal added that the home has served as a vacation rental, with quick access to the area’s beach communities. “It’s very good for investment, too,” he said, “offering an attractive rental yield if it’s rented out for short-let whenever vacant.”

The approximately 3,200-square-foot house is set on a 0.17-acre lot that includes a courtyard area with a pool, a wood deck and an outdoor shower. A stone pathway cuts through the front garden and its furnished seating area, leading to a broad veranda with tile floors. Inside, a chandelier hangs from the 15-foot ceiling in the living room, and the dining room has a bar, an adjacent half-bath, a large wood table and an upright piano. (The house is being sold furnished, piano included.) A quick right turn from the front door leads to an en suite bedroom with a loft that could be used as an office.

Down four steps from the dining room, a casual dining area has ornate terrazzo floor tiles, ornamental bas-relief details on the walls, and doors that open to a patio area with a pool and a dining area. The adjoining kitchen is spacious and contemporary, with checkered floors, wood cabinetry and a large glass pendant lamp. Two en suite bedrooms are at the rear. One has a large private veranda with views of the garden greenery.

A renovation completed in 2017 overhauled the electrical system, roofing, water and septic tanks and décor, Mr. Goyal said, but the seller also preserved many characteristics of the original structure, including the 18-inch thick walls.

The property is about seven miles north of Goa’s capital, Panaji. Candolim Beach, popular with tourists for its calm waters, shops and restaurants, is less than 10 minutes by car. Amenities within a five-minute drive include hotels, restaurants and the Museum of Goa, which exhibits contemporary art. Goa International Airport is 23 miles away.

The Indian state of Goa, with about 1.5 million residents, has been a coastal playground for tourists from India and abroad since the 1960s, when India annexed the land from the Portuguese Empire.

“Goa started off as a place for people in the second half of life,” said Sanjiv T. Lall, chief executive of XOGoa.com, a luxury real estate agency. “People who had broken marriage, divorces — divorcés, widows, widowers, people who wanted to live a retired life.”

Those foreigners typically bought historic villas built during the period of Portuguese rule, he said — many with “large, airy verandas,” tall ceilings, thick walls and tile roofs — and restored them. “They liked that colonial art form.”

During the past decade, though, Goa has seen its foreign-resident population diminish as India has begun to enforce legal restrictions on foreign property buyers. As a result, the historic housing stock that foreigners once prized has also dwindled, Mr. Lall said.

Indians from major cities have taken their place, and tend to prefer new construction over salvaged older buildings. “They want new apartments,” Mr. Lall said. “So Portuguese architecture unfortunately has been getting eroded. And in about 10 years, 20 years, it’ll disappear.” (He added that some areas are protected from development.)

As demand for new construction has increased, so have prices for the new properties — around 8 to 15 percent a year for the past three years, said Amit Chopra, the director of Goa-based Escala Realty and the president of the Goa Association of Realtors.

“Everybody wants to come to Goa at least once in his life, and most of the people who end up coming here want to purchase a property here,” Mr. Chopra said, pointing to the area’s scenic beauty, cosmopolitan feel, low pollution and relatively low population density. “It becomes an aspiration.”

Thanks to the mounting demand, Goa has fared better than the rest of India in terms of property prices. While the country’s real estate market has slumped of late — the result of recent changes in monetary policy, employment rates and tax reform, agents said — in Goa sales volume has slowed but prices are uneven.

At the high end of the market, where Sotheby’s operates, demand has also been increasing, but there are still more sellers than buyers, Mr. Goyal said. Luxury in Goa starts at about 42 million rupees (about $600,000), though other agents put the minimum luxury threshold closer to 70 million rupees ($1 million).

Given that beach areas have been extensively developed, Mr. Lall encouraged buyers to look inland, away from the coastal belt. “The inner hinterland is still very nice and pristine,” he said.

Who Buys in Goa

The shift in government policy regarding foreign buyers has significantly altered the demographics of who buys in Goa.

“The government kind of turned a blind eye and made it easy for people to buy. But now they’re going by the rule of the book,” Mr. Lall said. He noted that many of those foreigners are moving instead to Thailand and other Southeast Asian countries.

Because foreign ownership of property is restricted in India, people who buy in Goa are typically Indian nationals and people of Indian origin coming from abroad. Both groups are mostly purchasing vacation homes, Mr. Goyal said.

“All the buyers here are non-Goans. Goans themselves don’t have that kind of money,” Mr. Lall said, referring to higher-end properties.

For the most part, said Siddhartha Shah, a real estate attorney in Mumbai with Siddhartha Shah & Associates, foreign buyers “cannot purchase property in India.” But there are loopholes.

One is to set up an Indian company. “Then, by taking the necessary permissions and approvals from the Indian government, a company can purchase property in India,” Mr. Shah said. “It’s definitely feasible.”

The permission process takes between three and six months. Foreigners may acquire a home on a lease not exceeding five years, though even in this case they would need government approval, Mr. Shah said.

Transactions are handled by property lawyers, who should ensure the title is clear, Mr. Shah said. The commission is typically 2 percent of the purchase price, and sometimes less for bigger transactions. Sometimes the commission is split between the buyer and the seller.

Mr. Goyal said that buyer’s closing costs, which include stamp duty and registration charges, total roughly 7 to 10 percent of the purchase price. Transactions are done in rupees, he added.

There are no property taxes on this property, Mr. Goyal said.