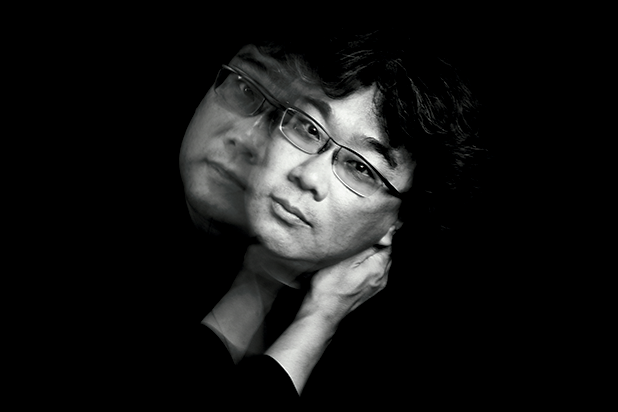 Photograph by Irvin Rivera for TheWrap

A version of this story about Bong Joon Ho and “Parasite” first appeared in the Down to the Wire issue of TheWrap’s Oscar magazine.

When Bong Joon Ho finished a mid-October interview and photo shoot for the cover of TheWrap’s first print issue this season, he stopped on his way out of the office to meet our film team. As one-by-one they told him how much they’d loved his film “Parasite,” Bong broke into a sheepish grin. “This is getting embarrassing,” he said.

In the three months since then, it’s safe to say that Bong Joon Ho has had plenty more embarrassing moments. He and his wickedly twisted black comedy have been the hit of the awards circuit, with the director and his actors picking up famous fans from Brad Pitt and Leonardo DiCaprio to Guillermo del Toro, who hosted a starry party for the film in early January.

“I tend to get shy easily,” Bong said through a translator a few hours after his film landed six Oscar nominations, including Best Picture and Best Director. “Even last night at the Critics’ Choice Awards, we sat next to the ‘Joker’ table, and Todd Phillips came over and said he saw ‘Parasite’ three times and felt so many things watching the movie. I could feel my face flush and turn red, I was so embarrassed.

“And whenever that happens, I just try to introduce other people. So I was like, ‘Here’s our editor, here’s our production designer, here’s the guy who built the house … ‘ That’s how I cope.”

The director, whose previous films include “The Host,” “Snowpiercer” and “Okja,” has been using that coping mechanism since the film won the Palme d’Or at Cannes, picked up the lion’s share of critics’ awards and is now the 11th non-English film to be nominated for Best Picture, and the sixth to be nominated for Best Picture and Best International Feature Film (formerly Best Foreign Language Film) in the same year.

“I’m particularly happy with the Best Editing and Best Production Design nominations for the film — for the film to be acknowledged for its craft and below-the-line work,” he said. “For Korean cinema, a lot of people in the international community only know the auteurs, the directors, but we have so many great technicians and masters working in the industry. And for the first time now, these amazing technicians are recognized.”

“Parasite” is the first Korean film ever nominated in every one of its six categories — including the international category, where voters have surprisingly ignored South Korea’s acclaimed cinema until now. “I knew I had hardcore fans for my films in the U.S.,” he said. “But the success of ‘Parasite’ has been on a different level.”

Also Read: 3 Reasons Why ‘Parasite’ Really Could Win Best Picture – And 1 Reason Why It Can’t

The film also became the first non-English film to win the SAG ensemble award, a prize that clearly thrilled the director. So why has this been the film to break through? “I don’t know the answer to that,” Bong said. “I wish I did, because that would really help my next project. But I don’t think it’s ever easy to figure out the reason behind success.

Asked if he thinks “Parasite” is his best film, Bong shrugged. “No, my next one is the best,” he said, in English, and then paused. “I hope.”

As for what that next one is, Bong has set himself an April deadline to decide between the two projects — one in English, one in Korean — he was working on before Cannes. But he’s also involved with Adam McKay in an HBO miniseries inspired by “Parasite.” “I had so many hidden ideas for background stories that I couldn’t fit within the two-hour narrative,” he said. “This project really began with my desire to create a five-hour film where I could expand and unfold these ideas. But we’re still in the early stages, and there’s no specific direction yet.”

Bong admitted that the awards-season experience has been a grind at times — “If I knew it would be this tough physically, I would have run away,” he said with a grin — but he said it hasn’t altered what he wants to do next, or how he wants to do it.

“Nothing has changed since Cannes,” he insisted. “When I was shooting the film, I never anticipated this or aimed for this. I just did what I have done for the past 20 years. These results can happen every time, or never again at all. But I know that very simply, from now on I just have to do what I’ve always been doing.”

Read more from the Down to the Wire issue here.

How do this year’s Academy Award contenders stack up against each other?

The Oscar nominations are hard to keep up with, even for those of us who try, and every year brings surprise nominations, unthinkable snubs and a series of films that, darn it, we haven’t all been able to catch up with. Watching all the feature films nominated at the 92nd Academy Awards is a time-consuming task, and mainlining all these movies doesn’t always paint a clear picture of what the Academy actually likes. A few of these nominees are practically inexplicable. Quite a few of the nominees are technically impressive but thematically empty (or troublesome). Some are merely mediocre, except for that one incredible, Oscar-worthy element. And, mercifully, quite a few others are truly brilliant from beginning to end.