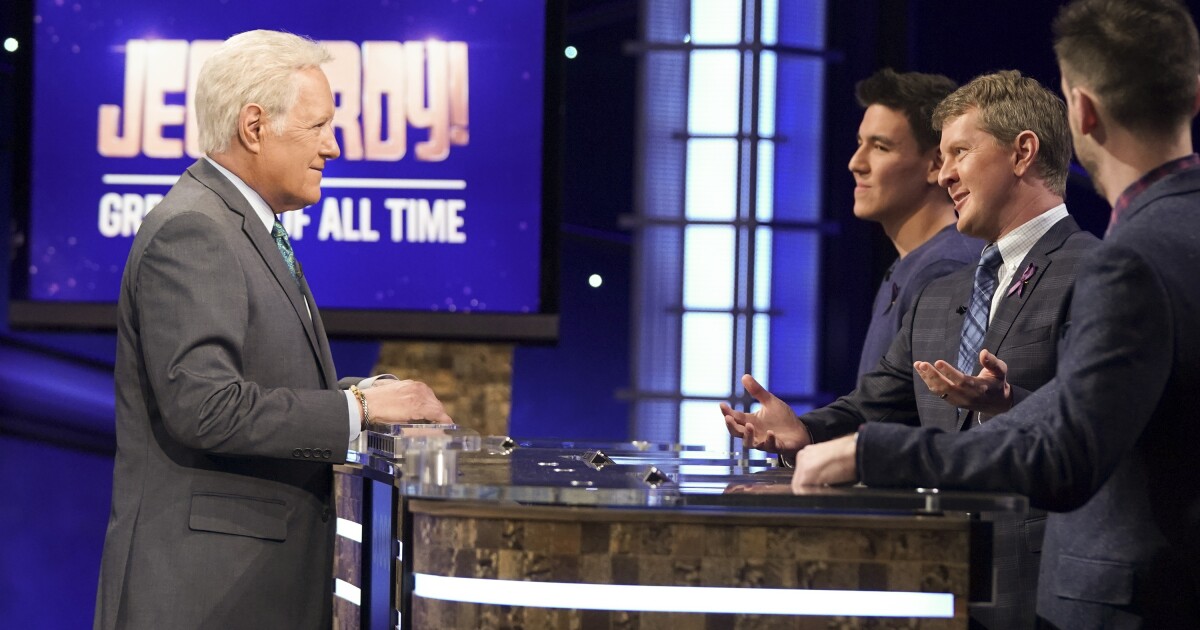 In the end, it was always going to be Ken Jennings.

The record-holder for winning the most consecutive games of “Jeopardy!” who consistently displayed an inhuman level of obscure knowledge and — more on this later — gallons of ice water in his veins, Jennings had to be considered the favorite when “Jeopardy! The Greatest of All Time” began last week.

And though the high-stakes swagger of professional gambler (and single-game winnings champion) James Holzhauer led him to victory in game one as he went toe-to-toe with Jennings over various runs of the board, it was Jennings who built an early lead on Tuesday night and weathered a late, Daily Double-fueled rush from Holzhauer to be crowned “Jeopardy!” GOAT and take home a million dollars.

And, oh yeah, Brad Rutter was there too. Thanks for coming, Brad.

Below, some of the standout moments from a special run of shows that could match any given sporting event in terms of tension, drama and displays of raw nerve. “This may be the last time you’re all contestants on this show,” Alex Trebek warned as the game began, and that gave the match an air of wistfulness given Trebek’s health struggles and looming retirement.

So let’s just get the rematch scheduled soon then?

Somehow, after Holzhauer took game one in “Jeopardy! GOAT” last week, Jennings only appeared to grow stronger game after game. The pace was set early on Tuesday as Jennings went all-in on a Daily Double in the first round, breaking out to a big early lead with a question on the Egyptian god of medicine, Imhotep.

“So often when you respond you respond in a questioning manner as if you’re not sure, and then you delight in the moment,” Trebek interjected, “it’s wonderful to see.”

“A lot of the times it’s a guess,” admitted Jennings before he added, “I just like to hear your reassuring voice, Alex.”

Jennings was far from finished, however. The next round, he bet it all again to double Holzhauer’s total with an answer of Tennessee Williams’ “The Rose Tattoo.” Then he pulled off the same bet in Final Jeopardy. Wagering more than $32,000 for a clue on the Grecian setting for Virgil’s “Ecologues” (Arcadia — but you knew that, right?). Watching Jennings at that moment was like seeing a last-second three drop at the buzzer to clinch the game, and all Holzhauer could do was pay his respects.

Later, even after Holzhauer at last drew a Daily Double of his own to make a charge in the second round, Jennings had enough of a cushion to not wager any money for Final Jeopardy. On an answer taken from Shakespearean tragedies about a non-title character with the most speeches, Jennings still knew the answer (Iago) while Holzhauer did not, sealing his victory.

That said, Jennings still couldn’t name Kanye’s new record in the second round. But, to be fair, neither could anyone else.

Part of the pleasures of “Jeopardy! GOAT” was witnessing how often the contestants showed a sharp sense of humor, which could also manifest in a little trash talk as well. As one might expect from a professional gambler, Holzhauer didn’t lack for confidence, and like everyone else he took playful notice of the struggles of Rutter, who despite his strong record was the clear also-ran for this tournament. Though he went all in for Final Jeopardy in an effort to close the gap in the first round, he failed to come up with the answer and lost everything.

As Trebek reset each players’ totals after the break, Holzhauer noticed something amiss. “Hey, Brad’s score is still on there,” Holzhauer said, referencing that Rutter’s total was already at zero. “Wow,” said Jennings as Rutter gamely took his lumps.

“It’s gotten to be that kind of competition,” Trebek said.

This week, we are all Brad Rutter

“Jeopardy! GOAT” just wasn’t Rutter’s tournament. Though certainly capable of making a run and rattling off a win Tuesday to spur a comeback for the show’s consistent bronze medalist, Rutter didn’t fare much better, missing a Daily Double that could have fueled an early run and dropping both answers in Final Jeopardy. Throughout “Jeopardy! GOAT,” Rutter was never really a threat.

And frankly, neither were you. Given the level of play between Jennings and Holzhauer, it was almost shocking when either of them didn’t have the answer, and frankly any given viewer celebrated by getting one or two in the span of any round. Rutter is the all-time winnings leader on “Jeopardy!” and he was rendered mortal by his competitors, just like the rest of us — except for him, it was on national TV.

And in doing so, he endured the above jab from Holzhauer and no shortage of the same on Twitter with his head held high. Falling short in the final category once more, Rutter could only offer, “You’re the best, Alex.” It was playing to the crowd, sure, but he genially defended his answer arguing, “It’s true, and I should get credit for it.”

Now, how about that rematch?