While limited advance booking of Imtiaz Ali’s Love Aaj Kal opened on Sunday, the film got in full swing from Wednesday morning and as per early trends, the film has fetched a good response in its ticket sales. The fact that it features real life lovers turned exes, Kartik Aaryan and Sara Ali Khan, has helped in creating the curiosity among the audience which in turn has pushed the ticket sales. With one day left for release, the rom-com has already recorded better response than recently released films like Bala, Pati Patni Aur Woh and Street Dancer, which appealed to similar set of target audience. This is a universal trend across the national multiplex chains and it has even surpassed the advance booking of Ajay Devgn’s Tanhaji – The Unsung Warrior on Thursday morning, putting itself in a position to take an excellent opening. Undoubtedly this has recorded the best advance booking of 2020 until now, and this record will stand tall until the release of Tiger Shroff’s actioner, Baaghi 3. 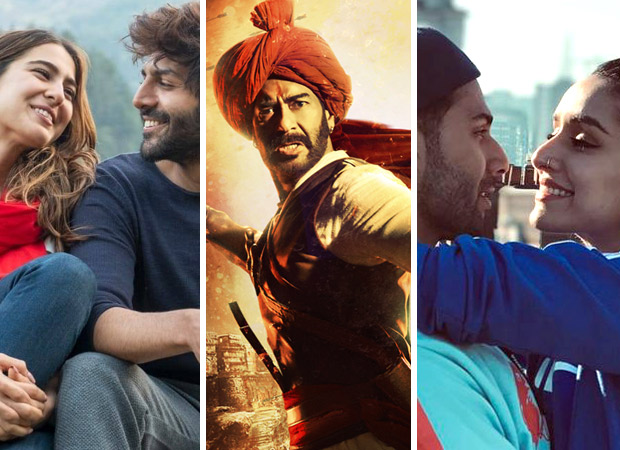 The partial holiday on account of Valentine’s Day is also working in the film’s favour as the genre and vibe of appeals majorly to the target audience. “It’s the perfect time for a film like Love Aaj Kal to arrive. In-fact, at our cinema chain, maximum tickets have gone in a pair of two, more inclined towards aisle or corner seats. The college going couples are coming out in big numbers already,” revealed a cinema owner adding further that the bookings will elevate even further on Thursday. “Spot bookings too will be very good for the film as a lot of students might bunk their colleges with their V-Day dates,” the source added.

The trailer of the film had fetched mixed response but that’s where other factors like star-cast, music and even a partial holiday come into picture. The multiplex chains have gone ahead with popular pricing strategy which means that the ticket rates would be higher than other films featuring stars from the bracket of Kartik Aaryan, Aayushmann Khurrana to name some. The best faring centres in terms of advance booking are the metropolitan cities like Mumbai and Delhi, however small centres like Lucknow, Bihar, Gujarat too are slowly and steadily coming into picture.

While the general trade expectation from the film’s opening was in the range of Rs. 10 – 12 crores, it wouldn’t be surprising if it opens higher given the current trend of advance booking. It would then all boil down to the content as even decent audience word of mouth will help the film sail through.

Nothing to see here. Just Janhvi Kapoor chilling in Lonavla with...