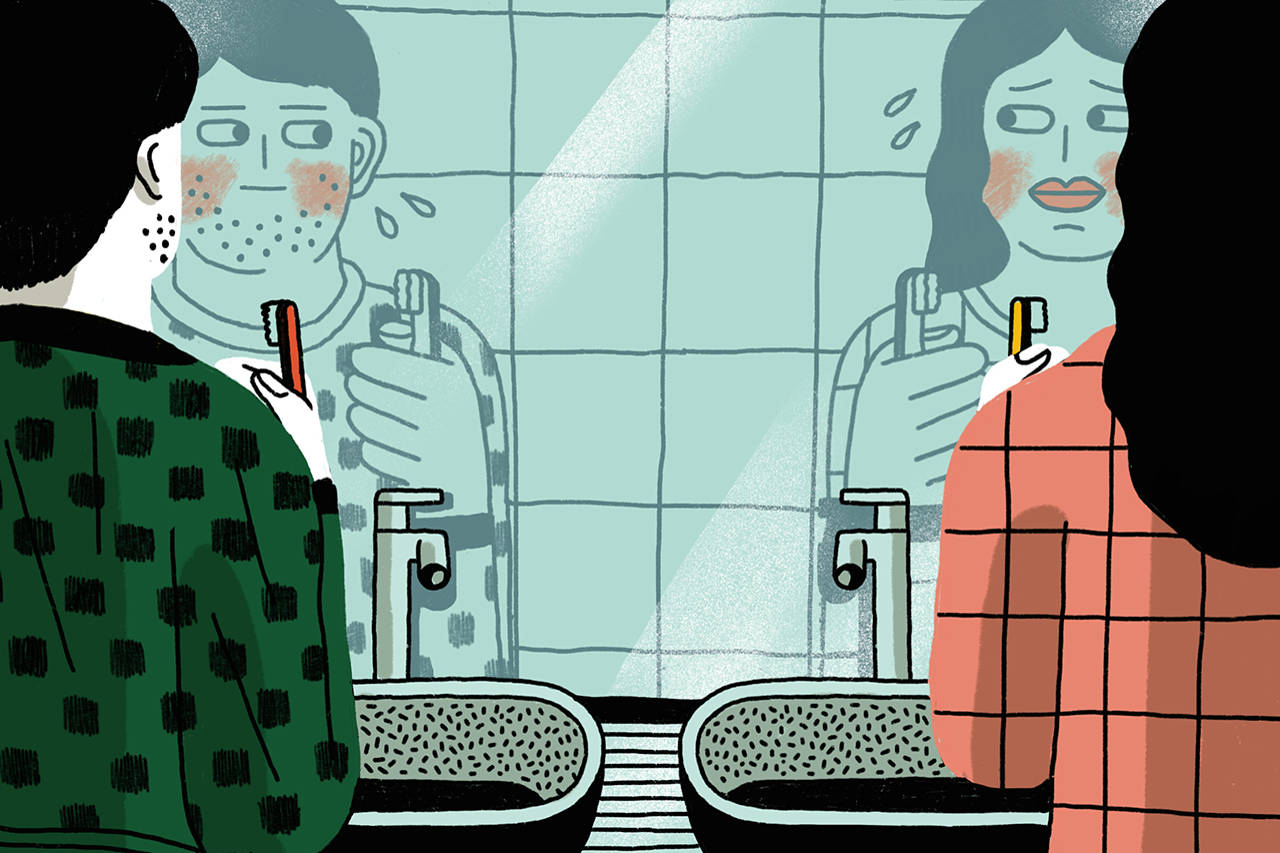 THE WORST DESIGN mistake I ever saw was in a home a real-estate agent showed my husband and me when we were moving to a new town. The house was lovely, actually, in every respect except one. The master bathroom featured two identical toilets, next to each other.

“It’s like a motorcycle and a side car,” my husband said.

“Would we have to wear helmets?” I wondered.

The second-worst design error I ever saw was also in a master bathroom—my own. During a remodel a few years ago I decided to install two sinks. Instead, I should have used the space to put in a linen closet. In the seven years since the remodel, the number of times the sinks have been used simultaneously: zero. I don’t know what I was thinking.

“
‘Brushing your teeth next to each other, you give up something—privacy.’
”

I mean, honestly. Do I want to be brushing my teeth at the same time as my husband, as if we are synchronized spitters? What’s next, competitive flossing? Sharing Q-tips?

I’m not sure what it is about bathrooms that makes us see double. (Maybe the mirrors.) And I’m not sure why Americans want their bathrooms to be big enough to accommodate a tourist bus that suddenly drops by. But bathrooms built for a crowd is a trend that is not going away.

In fact, nowadays 77% of home buyers want dual shower heads so badly that they are willing to pay $800 more for a bathroom equipped with two, according to a recent survey conducted by Meyers Research in partnership with NewHomeSource.com. The 2019 Consumer Insights and Products Survey of 31,000 participants also found that 59% of home buyers would pay a premium of $2,500 or more for a bathroom with a walk-in shower and separate tub.

How did American bathrooms get so grandiose?

has a theory. “It started with colored fixtures in the 1920s,” said Ms. Hoagland, author of the book, “The Bathroom: A Social History of Cleanliness and the Body” (Greenwood, 2018).

I marveled that our feelings about bathrooms had been altered by pink toilets.

“And sinks and tubs,” she said. “It was a technological leap, when we were able to perfectly match the colors on two different materials, porcelain and vitreous china. Suddenly the bathroom could be sold as a room with style.”

The attitude was a sharp contrast to that of earlier decades, when most bathrooms were antiseptic, no-frills add-ons to houses. And during the construction boom of the post-World War II decades, the trend continued. By 1990, the standard size of new bathrooms was twice that of 1970 versions, increasing from 35 square feet to 70. As bathrooms transformed into “a place of luxury and sensuousness, in these ever larger rooms, you have to put in something,” Ms. Hoagland said.

But with people brushing their teeth next to each other, you also have to give up something—privacy.

When I think of my all-time favorite bathroom, what comes to mind is not a free-standing soaking tub for two, side-by-side showers or twin medicine cabinets. My fondest memories are reserved for a tiny closet of a room—the so-called master bath in an apartment I lived in a few years ago on the Upper West Side of Manhattan. This was a one-person room, requiring the occupant to shimmy sideways past the sink to reach a shower stall that had dimensions roughly the same as a telephone booth.

The weirdest part: When we first moved into the apartment, I didn’t use that bathroom for about a month, fearing it would be claustrophobic. But it turned out to be incredibly cozy in there, alone.

For me, that was the epitome of luxury and sensuousness. And that, maybe, is the paradox: For the past decades, we’ve been building bigger bathrooms as if this were a desirable thing. Instead we could be having linen closets and privacy.

Wouldn’t that be better?

“For most people, yes,” said

an environmental psychologist in Princeton, N.J., who advises clients seeking remodeling advice. “Bathrooms have evolved to be sanctuaries, where we can retreat from our fast-paced world and take a moment to be authentically ourselves.”

Her advice to clients is design a bathroom that feels like a room where you like to read old magazines, brainstorm new ideas and even sing, she said. “It’s a place to begin and end the day,” she wrote in a recent article.

To create a serene atmosphere in a bathroom, Dr. Israel recommends installing materials that evoke “primal elements—water, earth, wind or fire.” Or you can install a high window “so you can take a shower and look out at nature and light,” she said.

In her bathroom, Dr. Israel has porcelain floor tiles that look like slate (“very earthy”) and a round copper sink (“primal, but copper has its own problems when it comes to cleaning it”).

Double fixtures don’t necessarily have to ruin the mood, though, she said, because nothing requires you to use them in tandem. “Having two sinks can also mean you don’t share—you always have your own,” Dr. Israel said.

“I would rather have a linen closet,” I said.

“We all know people like you, who stand there and say, ‘Why did I do this?’” she said. “If you were one of my clients, I would ask you, What does the bathroom look like now?”

“Very symmetrical,” I said. “Visually, it’s nice. Cabinets with glass doors next to the sinks. Lots of white tile and a big window.”

“It sounds like if you could make a place to store linens in it, you might be happy with it,” she said.

Now that she mentioned it, the glass-fronted cabinets are pretty empty.

“I could probably shift a few things around,” I admitted.

Later that day, when I was in my bathroom, I burst into song.

As Harvey Weinstein’s Criminal Trial Heads to Jury, Has the Prosecution Made Its Case?