Octi has created a new social network that uses augmented reality to combine the process of seeing your friends in real life with viewing digital content like their favorite YouTube videos and Spotify songs.

When I wrote about the startup in 2018, I was building an AR technology that makes it easier to see the human body and movement. Last week co-founder and CEO Justin Fuisz (see picture above) told me that this was "a really cool feature" but that Octis investors were pushing him to "do more to go deeper".

Regarding these investors, the startup says that it is now $ 12 million (including a previously announced $ 7.5 million launch round) from Live Nation, Anheuser-Busch InBev, Peter Diamandis & # 39; Bold Capital Partners , Human Ventures, I2BF and Tom Conrad. Scott Belsky and Josh Kushner.

Last week Fuisz showed what he now sees as Octi "Mic Drop" moment – Open the new app and point the iPhone camera at a colleague. The app quickly recognized her and Fuisz sent her a friend request. And once the request was accepted, Fuisz could look at it again through the camera, where it was surrounded by a floating "belt" of virtual objects that she had created with videos, songs, and photos.

With Octi you can also insert fun effects and stickers. Your friends can also change your profile and make you wear a fun hat, or give you a rousing theme song for the day.

To create a face recognition experience that is quick and easy, Fuisz said Octi is powered by a "neural network on the edge" so the app can process images on the device in a privacy-friendly manner (instead of uploading them to the cloud).

He said the company had taken other steps to optimize the process, e.g. For example, prioritizing friends instead of searching everyone's faces on the network, resulting in an app that can identify a friend in just 20 milliseconds.

With Octi, you can view friends' profiles remotely. However, it should be emphasized that the core experience is only for personal use. In fact, the company made a statement by analyst Rich Greenfield, describing the app as "impressive technology that gives teenagers a compelling reason to be present and communicate with their phones while meeting their closest friends." 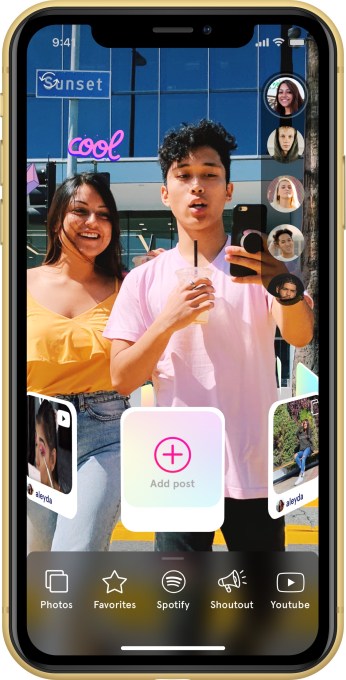 I was wondering if a new social dynamic also offered new opportunities for harassment and bullying, but Fuisz found that Octi profiles and belts are currently only visible to friends you have approved. So if one of your connections does something you don't like, "just say goodbye. That's it. It's an easy way to deal with it."

Fuisz added that this first version provides a foundation for many more experiences: "There are endless opportunities for games and other fun things to do."

Ultimately, he hopes to turn it into a WeChat-like platform for external developers to create social tools and content. And since Octi is running on iPhone 7 and later (with plans for an Android version later this year), it can potentially reach a huge audience out of the window instead of facing the scaling issues of a more specialized AR or VR hardware platform.