At a summit at the monarch’s Sandringham Estate on Monday, the 93-year-old queen presided over a meeting to determine how the duke and duchess of Sussex can both leave the monarchy while retaining a royal status of sorts after their decision plunged the House of Windsor into confusion.

The queen said in a statement following the gathering that she was “supportive” of the couple and gave her blessing for them to step back from royal duties to divide their time between the U.K. and Canada. But she added a transition period was needed. “These are complex matters for my family to resolve,” the statement added.

The couple say they want to become financially independent. But given the web of tax, security implications, royal protocol and the political sensitivity of royal finances, it is unclear whether that is possible. Minor members of the royal family have struggled in the past to monetize their links to the monarchy without getting embroiled in scandal or cheapening the royal brand. 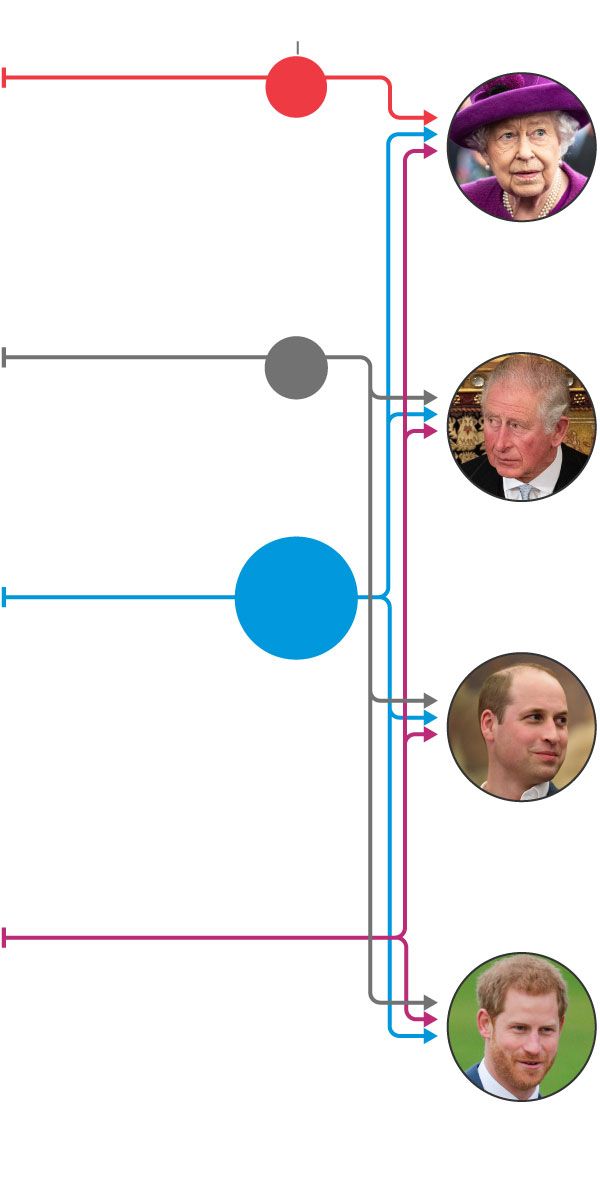 Portfolio of land, property and assets held in trust

Portfolio of land, property and assets held in trust

derived from their personal investment portfolio, private estates and companies

Over the past three decades, the queen has undertaken a balancing act to ensure the monarchy both maintains pomp while avoiding alienating taxpayers who help bankroll the franchise.

She has trimmed excess expense and excess royals, including her younger sons Prince Andrew and Prince Edward, who since the early 1990s haven’t received annual taxpayer grants. They remain, however, still largely under the royal wing and receive funding from the queen’s private income.

Should Prince Harry and Meghan Markle still benefit from public funds once they step back from royal duties? Join the conversation below.

The duke and duchess of Sussex say they want to break that mold. On their website they speak of their desire for a “new working model.” They have already applied to trademark “Sussex Royal,” covering a host of items including socks and greeting cards.

However, on their website they state that they expect to keep state-funded security and continue to live in a cottage owned by the queen and refurbished at a £2.4 million ($3.1 million) cost to taxpayers. They also want to split time between Canada and the U.K., raising logistical questions including whether Prince Harry would have to pay income tax on his earnings.

Reports from Britain suggested Canada has agreed to pay for the Sussexes’ security while in the country. Finance Minister Bill Morneau said Monday there has been no discussion among officials about this matter.

It isn’t easy outside the royal fold. The queen’s youngest son, Prince Edward, ran a television production company that has since closed. Prince Edward continues to take part in royal engagements and receives funds from his mother.

Prince Andrew was restyled as the U.K.’s special envoy for trade but that ended after he struck up a friendship with convicted sex offender Jeffrey Epstein. Last year, he announced he would no longer carry out his trade duties.

Prince Harry and Ms. Markle benefit from having more star power than the other royals. One reason palace officials were so upset by the announcement is that the couple were seen as an asset the family could have used. “They are both very talented,” said one former aide. “This is a real shame.”

Britain’s royals are rich, but not extremely so, said David McClure, an author who has written about royal finances. “They are millionaires, not billionaires,” he said. How rich the family exactly is remains subject to conjecture. Their private investments are largely shielded from public view.

Much of the British monarchy’s wealth is concentrated in the hands of the queen and Prince Charles, much of whose diverse land holdings are held in trust and help bankroll an extended royal family.

Prince Harry, for instance, is largely funded by his father Prince Charles through the Duchy of Cornwall, the estate of the first in line to the throne. He also inherited money from his mother, the late Princess Diana, and the queen’s mother.

In 1760, the British monarchy handed over revenue from large tracts of land to Parliament in return for an income from government. Today, that taxpayer payment, known as the sovereign grant, covers the cost of royal duties and maintains several palaces, including Buckingham Palace.

Last year, it amounted £82.2 million. This is fixed as a proportion of the profits made by these lands, which was initially set at 15% but has been temporarily increased to 25% since 2017 to help renovate Buckingham Palace.

The Queen supplements this with two other sources of income: her personal wealth, which is not publicly disclosed, and the Duchy of Lancaster, founded in the 13th century, which comprises £548.6 million of net assets, held in trust mostly in real estate.

Payment to the monarch from the Duchy of Lancaster increased from £13.3 million in 2009 to £20.7 million in 2019. That gives the Queen more financial freedom to support her wider family without recourse to taxpayer money, said Mr. McClure.

Prince Charles meanwhile lives mainly off the Duchy of Cornwall. The Duchy, which dates back to the 14th Century, paid out £21.6 million to him last year on £923.8 million of net assets.

The Duchy, which pays no corporation tax, has seen its revenue trend up over recent years. The Duchy of Cornwall funds both Prince William and Prince Harry, who together received around £5 million last year from their father.

In the 1990s, the House of Windsor went through a rough patch. Prince Charles and Prince Andrew both were divorced. The royal family also botched a response to Princess Diana’s death in a car crash.

That fueled growing media hostility to the taxpayer money handed to the monarchy. Buckingham Palace has since worked hard to push the issue of the royal’s finances onto the back burner.

The family dispensed with the royal yacht. The Queen and Prince Charles volunteered to pay income tax. Expenditures at Buckingham Palace was cut.

The number of royal patronages and affiliations with charities meanwhile has swelled during the queen’s 67-year reign. “It gets them out among the people,” said Frank Prochashka, a historian and monarchy expert at Oxford University. “They know that is what is going to keep them going.”

Royal advisers pushed a new generation of royals to the fore to give the monarchy a more modern feel. Prince Harry and Ms. Markle’s wedding in 2018 marked a high-water mark for a rebrand of the House of Windsor, marrying tradition with a U.S.-born television star.

Last year, royal advisers were already looking at ways to carve out a new role for Prince Harry and Ms. Markle, according to one person close to the family. However, the couple wanted to accelerate the de-merger from the family, the person says, amid growing media scrutiny of their private lives.

—Paul Vieira in Ottawa contributed to this article.

Write to Max Colchester at max.colchester@wsj.com

‘Beast Beast’ Director Danny Madden on How His Characters Each Play...