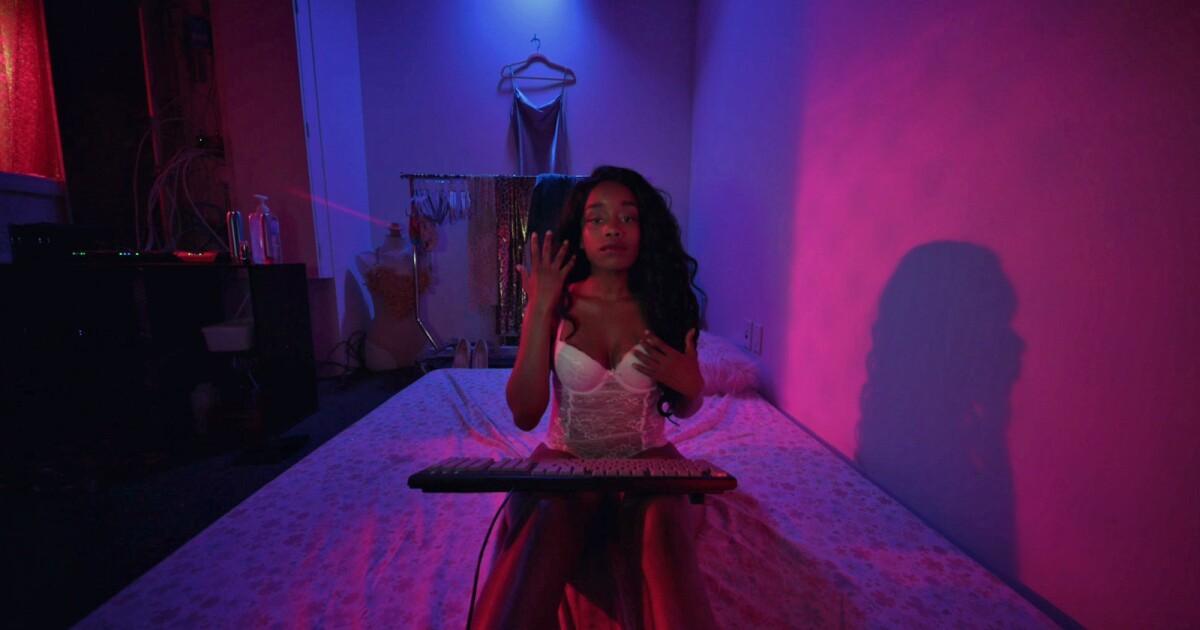 That sounds like a lot for the shoulders of a modest character study, one that writer/director/producer/co-actor Perrier — drawing from her own youthful experience as a “cam girl” in Las Vegas — apparently shot in only 10 days, and finished with help from a GoFundMe campaign (as poetic a change in web-earning prowess as one could imagine). But those issues aren’t really on the shoulders of “Jezebel,” they’re its beating heart: in the gifting of a wig as a performative prop, in family squabbles about who’s pitching in and who isn’t, in the shoptalk of sex workers, and in the name 19-year-old Tiffany (Tiffany Tenille) assumes when she takes the advice of her older sister Sabrina (Perrier), a phone sex operator, and answers an ad for an “internet model” at a fetish website.

The notorious Jezebel stereotype as applied to black females dates back to slavery. But as Tiffany’s chosen moniker it’s a wry modern reclamation, as she’s the only black woman among her mostly friendly co-workers, making good (then better) money from the unquenchable desires of white men with whom she thankfully never has to be in the same room, and discovering something about her sexual power, bargaining might and self-pride in the process.

At home, though, in the weekly rental she shares with four other family members — including judgmental but jobless brother Dominic (Stephen Barrington), and Sabrina’s young daughter Juju (Rockwelle Dortch) and hanger-on boyfriend Dave (Bobby Field) — life’s frustrations and exhalations make for a situation ever in flux. The siblings’ mother has just died, they’re behind on rent (and can hardly pay for a funeral), and right now only the women are working.

But Perrier — who is also a very fine naturalistic actor in conveying Sabrina’s weary authority — avoids easy melodrama directing this scenario, preferring to suggest the lived-in feeling of a tight-knit group who can grate on each other but also try to do their part, and who grab where they can the moments of closeness that help them feel not so constrained by their hardship. There’s also a true filmmaking sensibility she and cinematographer Brent Johnson bring to the two-location construct — angles, colors and choreography imbue each scene with the relevant tone, of either privacy invaded or intimacy welcomed. It’s a welcome thoughtfulness of style that counterbalances the kitchen-sink urgency usually applied to these tales.

Tiffany’s on-the-job scenes, meanwhile, are somehow both quotidian and sensual — workplace details and role-playing in a careful dance. Perrier’s striking handling of them makes for one of the more lively, nonjudgmental portrayals of sex work to be found in recent cinema. That said, Tenille’s coming-of-age role is a tricky one, and her emotional shifts can sometimes feel curious more than illuminating. But she’s got a bright, engaging face and physicality that effectively communicate someone looking to emerge with each turn of fate, not shrink.

It says something about the kinds of underclass stories we typically get in movies that one watches “Jezebel” waiting for the kind of emotional devastation or tragic plot twist that confirms a well-entrenched, culturally biased tendency to view certain lives as only hopeless or eternally sad. That Perrier has instead turned her memories of an uncertain time into something honest, funny, sexy and warm — and, sure, not unsuspenseful — is worth cherishing. “Jezebel” is a reminder that in everyday human stories is proof that the world is wide, and that in going behind the doors that movies rarely open, there are even more worlds worth discovering.

Ranveer Singh or Hrithik Roshan who will feature in the Kaithi...