The Saregama Carvaan series is unique and the original Carvaan of the same name caught the attention of music enthusiasts across India. Although these products can be classified as wireless speakers, they are very different from others because they are intended for an audience with no technical background. The most enticing feature of these speakers is their pre-installed music – 5,000 classic Hindi films and classic titles that can be heard with just a few buttons and a rotary knob.

While the core functionality we loved has not gone, the company has made the Carvaan 2.0 a little more modern. The Saregama Carvaan 2.0 is priced at Rs. 7,990 and works just like the original Carvaan speaker, along with a major innovation – internet connectivity. This new model can access over 150 Internet radio stations and podcasts via WiFi. Does this make a product that is known for its simplicity difficult? We've had a chance to use the Saregama Carvaan 2.0 for a while, and here's our report.

The Saregama Carvaan is not only user-friendly, but also offers a large selection of pre-installed music. The device is designed like an old radio, which makes up a large part of its attractiveness for an older audience. Saregama reasonably (in our opinion) decided to stick to this aesthetic and has made little change to the Carvaan 2.0. The speaker looks almost identical to its predecessor, and the only real difference is that there is a single additional button on the front labeled Wi-Fi.

This is the big innovation of the Carvaan 2.0 – Wi-Fi connectivity offers users a new way to play music. Wi-Fi mode is an extension of the Saregama mode of the speaker that allows the user to play music collections curated by Saregama. While the "Artistes", "Specials" and "Geetmala" modes are limited to the built-in music of the loudspeaker, you can "Wi-Fi" mode stream from a curated list of over 150 online audio stations, the specified track lists and play programs. We'll go into that a little later in the review.

If you're familiar with an earlier Saregama Carvaan model, the rest of the functionality is the same. The collection of over 5,000 pre-installed tracks mainly focuses on classic Bollywood music from the past few decades, but there are also devotional pieces and songs for children. You can also play your own music by connecting an external source device via Bluetooth, USB and Aux and listening to FM or AM radio.

There is a small monochrome display on the front that shows basic information. The charging process takes place via a micro USB connection on the back. During our reporting period, we were able to achieve around 4 hours and 30 minutes of play time on a full charge, which included pre-installed music, streaming Wi-Fi music and some Bluetooth audio. The scope of delivery of the Saregama Carvaan 2.0 includes a charging cable, a wall adapter, an antenna attachment to improve the radio signal and a small remote control, on which all buttons and controls of the device are available.

The Saregama Carvaan 2.0 is designed to be used just like the original, and still focuses on simplicity. All buttons are physical and provide feedback. The mode toggle buttons are on the left, while the Saregama selector buttons and dial are on the front and the volume control is on the right. The on / off switch is a spring operated button at the top, and there is also a headphone jack through which you can listen to music from the Carvaan 2.0 privately.

The core functionality of the Saregama Carvaan 2.0 remains the integrated music and playlists, and this experience has not changed at all since the original Saregama Carvaan. It remains as simple as before; You can search for artists and tracks on the device by pressing the buttons and turning the dial. Most of the listening fun comes when you don't know what to expect next. Navigation is a bit slow and flawed, and the remote control works just as slowly as the physical controls. The best way to enjoy music with the Carvaan 2.0 is to just let the speaker do its job instead of trying to control what you hear.

The Saregama Carvaan app, available for iOS and Android, simplifies the process when you want to stay in control. You can use your smartphone as a bluetooth remote control to tell the Carvaan 2.0 what to play from its collection, and it worked well for us on Android. The app makes it easier to scroll through track lists and artists than with the wheel and buttons on the speaker. You can also play your own music via Bluetooth, USB or Aux or listen to radio stations.

The app is required to set up Wi-Fi connectivity for the Saregama Carvaan 2.0. The process was a bit complicated and rather buggy; It took us a few tries to finally connect the speaker to a Wi-Fi network. There were many unexplained errors. However, we finally connected the speaker, after which it could stream easily. After the configuration, the speaker automatically connects to your Wi-Fi network and it worked perfectly for us. Users who are not familiar with technology may have problems with the initial setup and may need help from technically savvy people.

Online content for the Saregama Carvaan 2.0 is provided in the form of audio stations that work just like the pre-installed artist and genre-based playlists, except that music is streamed from the Internet. More than 150 audio stations are currently available, and Saregama says additional stations are added regularly.

Most broadcasters are currently focusing on dedicated content as well as genre and mood based playlists. There are also some talk shows and conversation programs on topics like cooking, finance, and health. Saregama calls these shows "podcasts". We would say that this is a fairly accurate description of what you can expect. 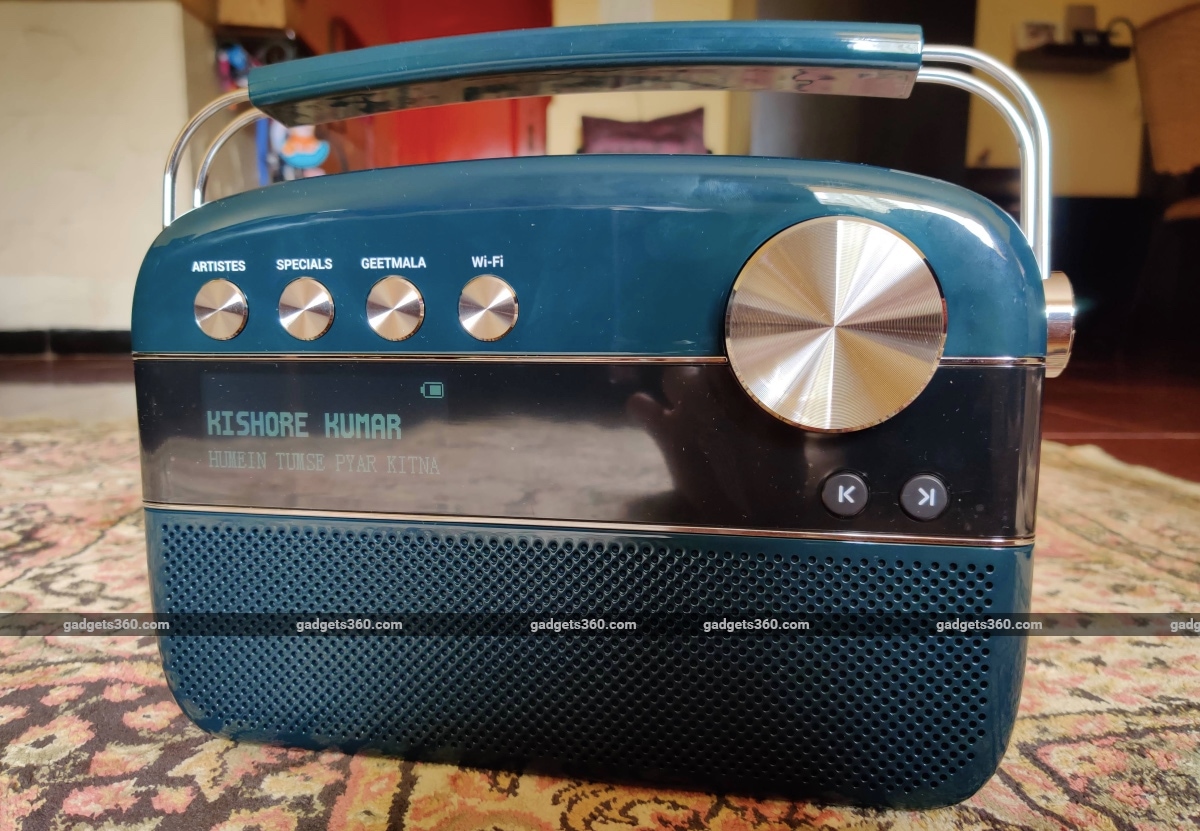 In addition, the content is occasionally changed by adding new tracks to some stations and adding new audio shows to the list. Saregama claims that 6 to 60 minutes of content is added daily. The content on these channels covers genres such as prayer, health and wellness, lifestyle and old and new music. While it is possible to search the online content with the device itself, the app made it easier for us to surf.

The online content gives the Carvaan a new dimension, allowing users to access more specific genres beyond the pre-installed tracks. There is some overlap between the online and pre-installed music, but the other content offered through Wi-Fi connectivity is largely unique. The promise of regular updates to the online content also ensures that the Carvaan 2.0 is much more useful than its predecessor.

The sound quality of the Saregama Carvaan 2.0 is similar to that of the original Carvaan and other products from the range such as the Carvaan Go. The mood focuses on older music and gets the best out of these tracks, many of which of course have a lower recording quality.

However, the sound quality with newer music, online content, and everything played through Bluetooth is acceptable for casual listening at home. The Carvaan 2.0 did not sound as good to us as the typical Bluetooth speaker in this price range, but it is important to remember that this is not an ordinary wireless speaker and the attraction lies in the content offered. Overall, the Saregama Carvaan 2.0 offers the same sound experience as its predecessor. 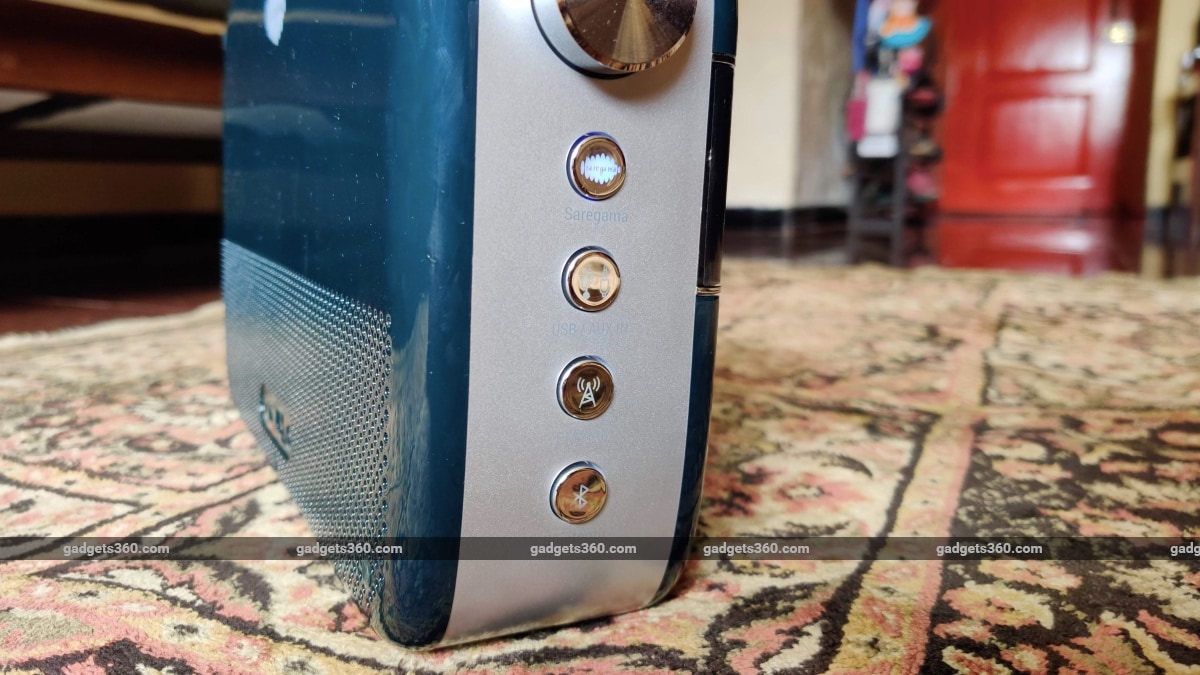 The functionality of the Saregama Carvaan 2.0 essentially corresponds to that of the original Carvaan. There is only one major difference between the two speakers – Wi-Fi connectivity. This makes the Carvaan 2.0 worth the additional costs and it is well suited to provide users with additional, immediately audible content without great effort. It's not clear how long Saregama will continue to offer online content, but the company plans to expand its scope and increase the number of online channels to around 1,000.

The aesthetics of this device and its pre-installed music library continue to be of great importance, and Wi-Fi connectivity is a good bonus. If you are looking for an extensive music collection (both pre-installed and online), the Carvaan 2.0 may be worth a visit and not the cheaper Carvaan.