Knowing that consumer interest in portable SSDs is growing, Seagate has expanded its portfolio. We have the new Seagate One Touch SSD for review today, which is relatively affordable and quite stylish. It is positioned as a technical lifestyle device and is aimed at people who do not necessarily need the best possible speed, but are looking for something better than a typical portable hard drive.

For those who have not yet tried an SSD, the differences to a hard drive are strong and surprising. They may be many times faster than hard drives, but much lighter, smaller, easier to carry, and more reliable. Many people like to spend good money on these benefits.

With a growing number of options on the market, will the Seagate One Touch SSD turn out to be the one to buy? Read on to find out.

Seagate definitely focuses on design with this model. The company opted for a credit card form, although despite the claim that it can be put in a wallet, this device is far too thick for it. In fact, this drive is almost exactly the same size as the very popular Samsung SSD T5, although the design is very different.

On the top there is a striking structured fabric and on one side a fabric bottle with the Seagate logo. The 1 TB version of this SSD is only available in white and black. However, if you choose the 500 GB version, there are special editions with blue, green, red or gray camouflage prints. Additional artist editions for both capacities will be shown on Seagate's US website, although these don't appear to be available here, and there is a possibility that more designs may come out in the future.

For a device that is positioned so modern and fashionable, we are quite surprised to see an old micro USB 3.0 port on the back, as most external hard drives still use it. This is not as practical as a USB Type-C port that we would expect from an SSD. Seagate also does not include a Type-C cable or adapter. Therefore, users with slim laptops that only come from type C have to buy their own adapter.

The supplied USB cable is short at 20 cm, but braided. If this matched the fabric on the SSD itself, Seagate could at least have used a matching white or gray. The bottom of the device is structured so that it cannot slide around easily. The sides are rounded so you can easily carry this device around in a pocket. At just 59g, it's pretty light too.

The main thrust of Seagate on this SSD model and the name "One Touch" is the "Continuous Auto Backup" function. The company states that the Sync Plus software can be downloaded for free from its website, although we couldn't find it easily. An installer or web link on the drive itself would have been helpful. It turned out that we had to find and download the Seagate Toolkit, which Sync Plus belongs to.

Users should note that there is a big difference between file synchronization and file backups. As the name suggests, the Sync Plus function keeps copies of the files or folders you have selected synchronized with a folder on the One Touch SSD. This means that all file changes, including deletions, are mirrored immediately, so data is not literally backed up. For example, you cannot restore older versions of files.

However, the software moves deleted files to an archive folder instead of mirroring the deletion immediately, so you may be able to fix some common accidents or errors that result in data loss. The mirror is also safe when the drive is not connected. You can choose between one-way and two-way synchronization. This means that your original files will never be replaced by files from the mirror.

Seagate also receives a one-year subscription to Mylio Create, an online photo storage and management tool. You get support for four computers and unlimited mobile devices with a cap of 50,000 photos. Seagate says this is worth $ 50 (about Rs. 3,575) and that it costs the same amount to renew your account for a year after that. Buyers of One Touch SSDs can also get the Adobe Creative Cloud photography plan (which includes Lightroom and Photoshop) for free for two months. 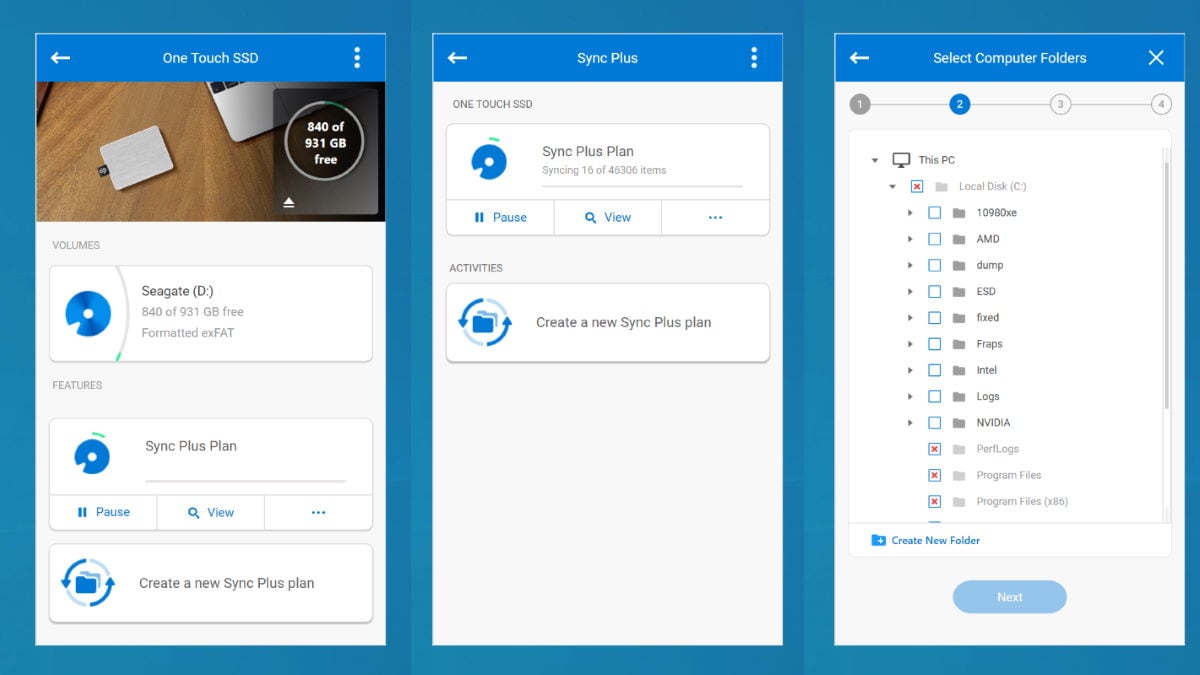 Specifications and performance of the Seagate One Touch SSD (1 TB)

The most important thing for an SSD is speed, and the Seagate One Touch SSD is designed for data transfers of up to 400 Mbps, which refers to sequential speeds. The company has released no further details on the drive's performance. The guarantee period is three years.

Our 1 TB unit was formatted with the ExFAT file system with 931.51 GB of usable space. You'll need to reformat or partition it if you want to use Time Machine for backups on a Mac. We would have preferred hardware or software encryption, but that's not a native feature.

CrystalDiskMark actually showed us a score that technically surpassed Seagate's 400 Mbps requirement. The sequential read and write speeds were measured at 439.7 Mbit / s and 309.9 Mbit / s, respectively. Of course, this corresponds to the best usage conditions for scenarios. A more accurate value to consider is the random read and write speed of a drive, which was 136.6 Mbit / s and 21.94 Mbit / s, respectively.

This is a pretty good performance as it outperforms some of the similar price portable SSDs we've seen recently, like WD My Passport Go and Adata SD600Q. Note that these numbers may not be the same for the 500 GB version.

The Anvil performance benchmark reported read and write values ​​of 1,218.89 and 453.46 for a total of 1,672.36. This is the same pattern, with reading performance being much higher than writing. 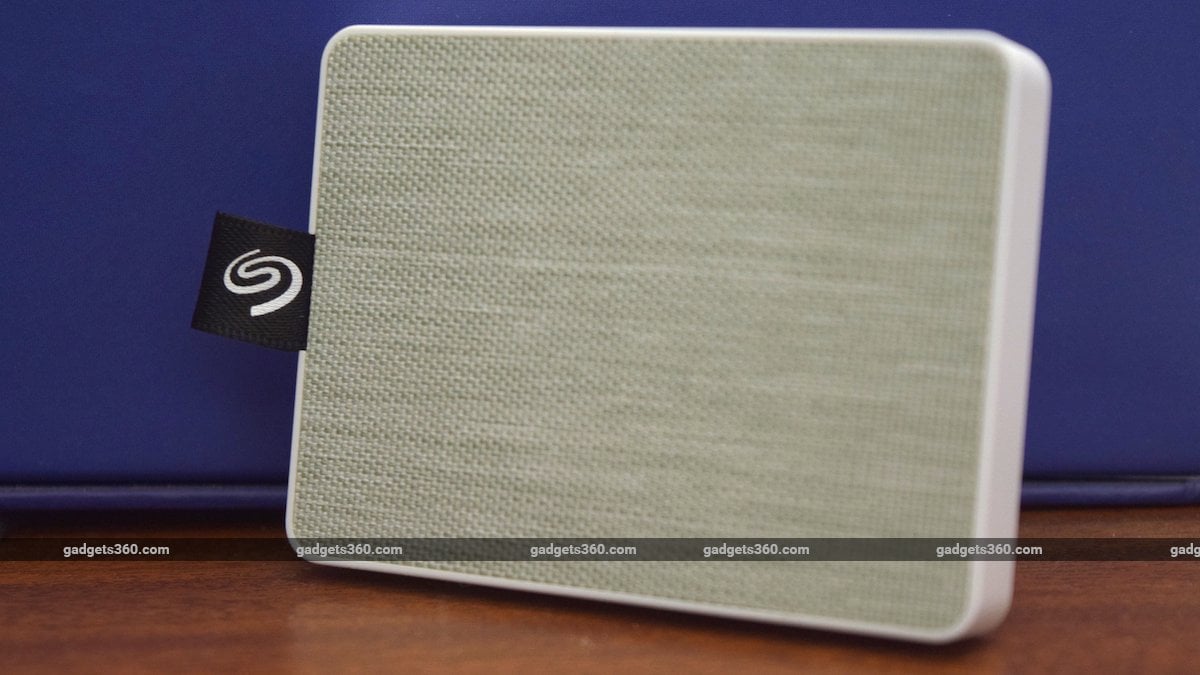 The Seagate One Touch SSD offers style and comfort

Overall, we like the Seagate One Touch SSD. It's pretty portable and looks good, and the performance is pretty strong too. However, we really cannot understand the decision not to use USB Type-C. It seems like Seagate is targeting mainstream users who may be ready to upgrade from a spinning hard drive, which is contrary to the otherwise first-class positioning.

The Samsung SSD T5 is still better in terms of performance, and Seagate also offers its own Fast SSD model if that's your priority. Both options use USB Type C and are supplied with Type A and Type C cables. They are not too expensive either.

The Seagate One Touch SSD is currently quite cheap, especially the 1 TB model that is sold online for under Rs. 10,000 (although prices seem to fluctuate quite a bit). There is also a slightly cheaper model called the Seagate Expansion SSD, which has neither the fabric design nor the software bundle, but is designed for the same speed of 400 Mbit / s.

How to smoke slowly and slowly on your charcoal grill – CNET

The years of waiting for the Giants to design their future quarterback is over. The...
Read more

The years of waiting for the Giants to design their future quarterback is over. The...
Read more