When we think of smart speakers, the first options that come to mind are Google Home and Amazon Echo devices. These speakers, which are usually in-house, are not very expensive, have built-in WiFi to stream music from various online services, and allow the use of voice assistants to help you provide information or easily communicate with your family and friends. However, the lack of a battery and the need to always be plugged in means that these speakers are limited in the way and location of their use.

The solution to the portability problem is a classic wireless speaker that usually requires a built-in battery for working outdoors or on the go. These speakers are connected to a source device such as a smartphone or tablet via Bluetooth to play music. The downside, however, is that you need to control the music on your smartphone and you probably won't be able to access streaming services on the device itself. There are exceptions – like the Boat Stone 700A that connects to Amazon Alexa through your smartphone – but most of these two types of speakers have their own categories.

The Sony SRS-XB402M is a brand new wireless speaker that closes the gap between these categories. Priced at Rs. 24,990, but available at a street price of Rs. 19,990, this speaker offers both Internet connectivity for online services and classic portability and flexibility via Bluetooth. We're reviewing this feature-rich wireless speaker to find out what it can do. Most portable speakers are usually compact and small enough to fit in tight spaces like a backpack. The Sony SRS-XB402M is nothing more than typical portable speakers. It is much larger with a cylindrical shape and weighs a hefty 1.5 kg. The size and shape of the Sony SRS-XB402M make it ideal for use on the table at home, but the portability option is there for those who want it.

The bottom of the speaker is rubberized, while two thirds of the outside is wrapped in fabric. The rear-facing third segment is made of plastic, with a rubber top for the buttons and indicator lights. There are vertical stripes of light that divide the body of the speaker into three segments, which also creates party effects when playing music. The lights in the stripes are multi-colored, but there is also a single bright flash above. We personally didn't like the lights very much because we found them distracting and too bright, but we see the attraction of using them in certain situations. Fortunately, they can be turned off.

The speaker itself looks good with the typical Sony style. It's attractive and catches the eye without being too noticeable (provided you turn off the lights). The back has a waterproof flap that covers the proprietary and micro USB charging ports. The speaker has protection class IP67 for dust and water resistance and is therefore suitable for all types of outdoor use.

The top of the Sony SRS-XB402M has buttons and indicator lights for the power supply, internet connection, Bluetooth and four other indicators for volume and battery level, which only light up when you adjust the volume or check the battery status. The buttons on the top control Sony's power, microphone, play / pause, volume, and live sound mode, which makes music sound like it's played live. There is a single button on the back that allows you to briefly change the lighting mode, while a long press shows the battery level using the four indicator lights at the top.

Interestingly, the Sony SRS-XB402M speaks with two voices – the first is the Sony voice that gives audible prompts for the speaker's core functions, while the second is Alexa, which responds with the language or accent you choose. Of course, Alexa must be set up on the speaker for this functionality to work.

The Sony SRS-XB402M has two angled 53 mm full-range speakers and two passive radiators – one in the front and one in the back. The speaker has a frequency range of 20 to 20,000 Hz and uses Bluetooth 4.2 with support for the audio codecs SBC and AAC. Wi-Fi connectivity uses the 802.11 a / b / g / n standard for online functions. In addition to Alexa, the Sony speaker also supports Spotify Connect, which can be used to stream music directly from the Internet via WLAN.

The speaker is ideally charged using the supplied adapter, which is connected to the designated charging port. However, Sony has also integrated a micro USB port to ensure a bit more flexibility. Aux and SD card connectivity are missing, so music can only be played through online services or Bluetooth.

Ideally, the Sony speaker is always connected because it stays on like an Echo Smart speaker and waits for voice commands. However, the SRS-XB402M has a built-in battery for wireless use, which is convenient if you want to take it to another room or take it with you when traveling. The battery life is said to be 12 hours per full charge, and we were able to achieve this number in our tests. 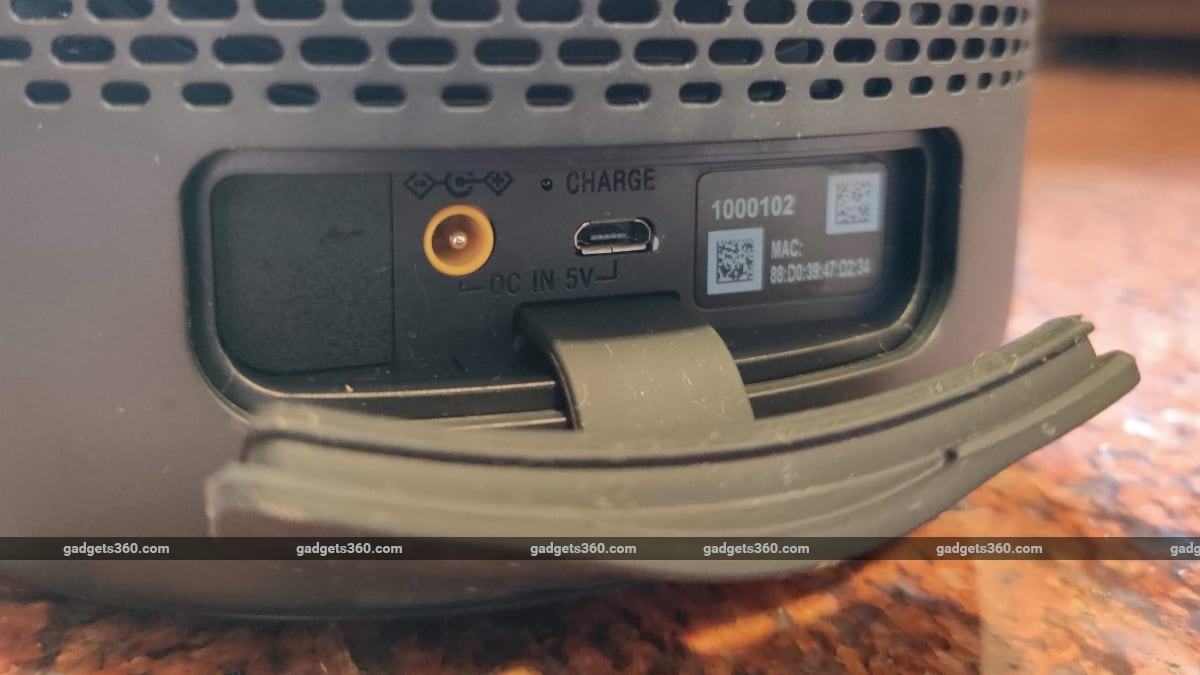 There are two ways to listen to music on the Sony SRS-XB402M smart speaker: via Bluetooth and via Wi-Fi. The former can be easily set up using the Bluetooth pairing settings on your smartphone or tablet, while the latter requires the Sony Music Center app (available for iOS and Android). The app is required to set up Wi-Fi connectivity on the speaker. Once complete, it can also be used to configure various settings and to enable Alexa. Both the smartphone and the speaker must be on the same Wi-Fi network. You can also see the approximate battery level of the speaker in the app.

Once fully set up, the Sony SRS-XB402M works like any standard echo speaker and offers almost all Alexa features, including music streaming and Alexa capabilities. If you have an active Amazon Prime subscription, you can access Amazon Music through the speaker. Other streaming services supported by Alexa, such as JioSaavn and Gaana, also work when they are enabled.

It should be noted that Alexa’s communication features, like other third party speakers, do not work with the Sony SRS-XB402M, including the ability to make announcements or voice calls to the speaker. For the full Alexa experience, we recommend an echo speaker.

Finally, the Sony SRS-XB402M also supports Spotify Connect, which works when your control device (your smartphone, tablet or laptop) is on the same Wi-Fi network as the Sony speaker. The function worked as expected and we were able to stream music directly from Spotify through the speaker while using our smartphone as a controller for song selection.

During our test, we used the Sony SRS-XB402M with music streamed with Alexa through Amazon Music, as well as with Spotify Connect and our own files on a OnePlus 7 Pro (test) with Bluetooth. We were impressed with the sound quality of the Sony SRS-XB402M in all formats and connection types, but found that the best sound was obtained when streaming music over WiFi.

We started with shooting stars from Bag Raiders and immediately liked the sound of the Sony SRS-XB402M. When using Spotify Connect, the track was loud and the sound was clean. The XB in the model name means that this speaker is part of the Extra Bass series, and this was heard in the acoustic signature. The fast beats and punchy bass in the track sounded great, with the Sony SRS-XB402M giving the sound an extra kick.

What impressed us most about the bass attack was how subtle it sounded. This was by no means an unchecked aggression, but somewhat more calculated and measured. Regardless of whether low-end, middle or high, this speaker sounded extremely sharp and detailed. The gentle lyrics in Shooting Stars never sank in the aggressive beat, and in our opinion Sony managed to literally boost the bass while maintaining the character of the track. 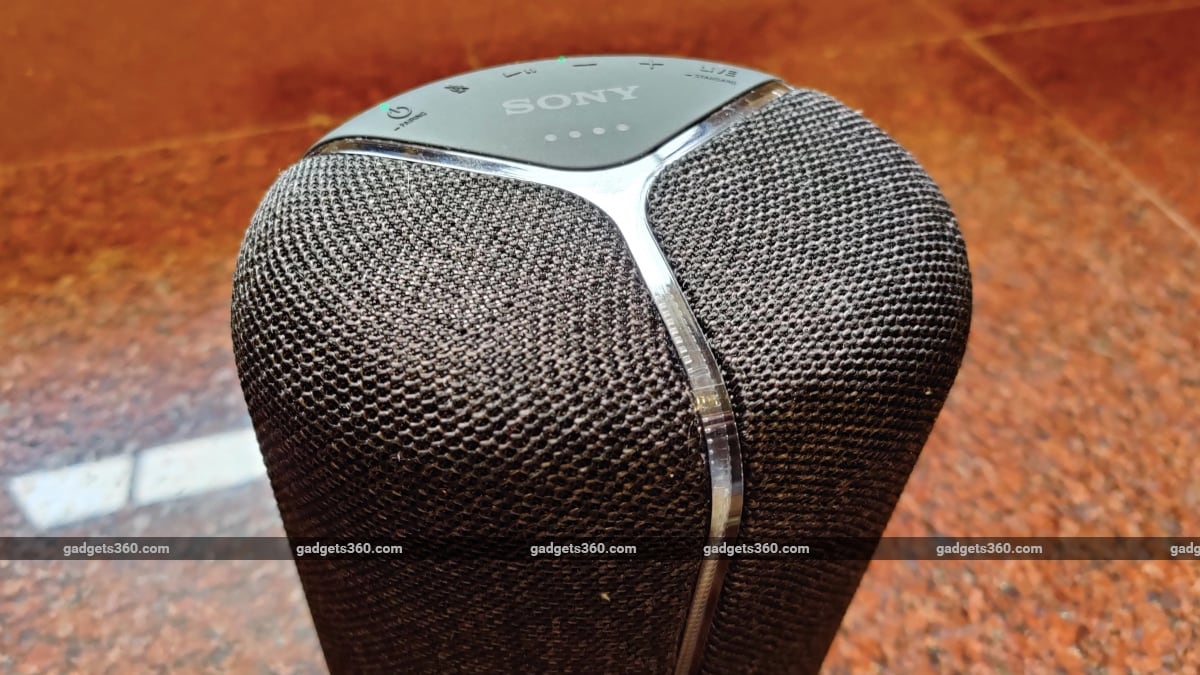 Afterwards, Closer by LeMaitre demonstrated the broad sound stage and the excellent instrument separation of the SRS-XB402M wireless speaker from Sony. This was due in part to the unique lean angle of the two drivers, while the passive front and rear coolers helped give the lower section a certain depth. The speaker once again showed unprecedented clarity and sharpness, and we've never heard of this level of detail from any other portable wireless speaker.

Then we heard Lotus from Dinka, a progressive house track with a fast but calming beat. We liked the rumble in the bass of this track and were particularly impressed by how loud and space-filling the sound was despite the relatively small size of the speaker. The Sony SRS-XB402M delivers results that resemble the correct two-channel speaker configurations and has a user-friendly acoustic signature – all in a small, portable form factor. We also found that the speaker sounded good even at low volume and didn't need to be turned up too high to improve the sound quality.

Alexa's voice assistant functions and music streaming for us, and the microphone was able to easily record voice commands from anywhere in a room. Switching between Amazon Music, Spotify Connect and Bluetooth was also easy. There was occasionally a slight delay between issuing a command and receiving an appropriate response. You have the option to use Alexa to answer questions or for skills. However, we have found that the speaker is more suitable for streaming music than a smart speaker.

The SRS-XB402M wireless smart speaker from Sony is the complete package for small one-box speakers. It offers the ideal combination of online connectivity and streaming with traditional Bluetooth playback and portability. High dust and water resistance, adequate battery life and the flexibility to be in its element both indoors and outdoors make the Sony SRS-XB402M an excellent device.

The only major disadvantage is the price. At Rs. At 24,990 (or even the MOP of 19,990 rupees), the Sony SRS-XB402M is much more expensive than most other wireless or smart speakers. Sure, the sound quality and features may make it so valuable for some, but this device is definitely a premium product and doesn't have connectivity options like an aux-in connector.

AllVoices raises $ 3 million to create a platform for anonymous...

Instagram rival VSCO fires 30% of employees to reduce dependency on...