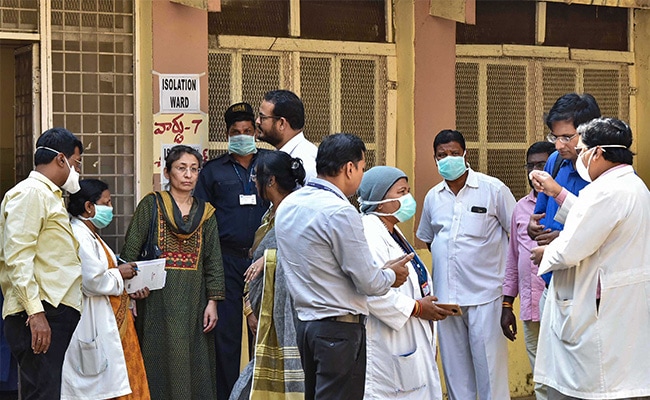 The outbreak of the corona virus has killed over 350 people in China. (File)

India's third case of coronavirus has been reported in Kerala after the southern state reported the first two cases of infectious diseases that have killed more than 350 people in China in the past four days. All three students returned from China's Wuhan city, the epicenter of the outbreak, last month.

The outbreak of the corona virus, which originated in China and has spread to more than 20 countries around the world in recent weeks, has been declared a global health emergency by the World Health Organization.

The third positive case of a patient with a new coronavirus was reported in Kerala. The patient has a travel history from Wuhan in China. The patient tested positive for a new type of coronavirus and is isolated in the hospital. The patient is stable and is under close surveillance, "the Union Department of Health said in a statement today.

"The patient is being treated at the Kanjangad District Hospital in Kasaragod," said Kerala Minister of Health KK Shailaja this morning. All three cases of coronaviruses have been reported in different parts of the state. While the city of Kasaragod is located in the north of Kerala, the first case was reported in Thrissur in central Kerala on January 30th. The central government reported the second case of infectious disease in Alappuzha on Sunday.

The Union Department of Health had also asked people who had been traveling to China since January 1 to report to the nearest health facility if they had symptoms such as fever, cough, or difficulty breathing. According to the government, more than 52,000 passengers from 326 flights were screened for novel corona viruses at various airports across the country by Saturday. Ninety-seven symptomatic travelers were sent to isolation facilities, officials said.

The central government suspended the online visa facility for China on Sunday. "Due to certain current developments, entry into India with e-visas will be temporarily suspended with immediate effect," announced the Indian embassy in Beijing.

Prime Minister Narendra Modi "is monitoring the situation personally," union minister Harsh Vardhan said on Sunday. "I am also in regular contact with the Kerala Minister of Health," he added.

Coronaviruses are a large family of viruses that cause a variety of diseases, from the common cold to more serious diseases such as the Middle East Respiratory Syndrome (MERS-CoV) and the Severe Acute Respiratory Syndrome (SARS-CoV). The most common symptoms are fever, cough, and difficulty breathing. In more severe cases, the patient may suffer from pneumonia, severe acute respiratory syndrome, kidney failure, and even death.

I accepted 83 because I could speak in Tamil: Jiiva