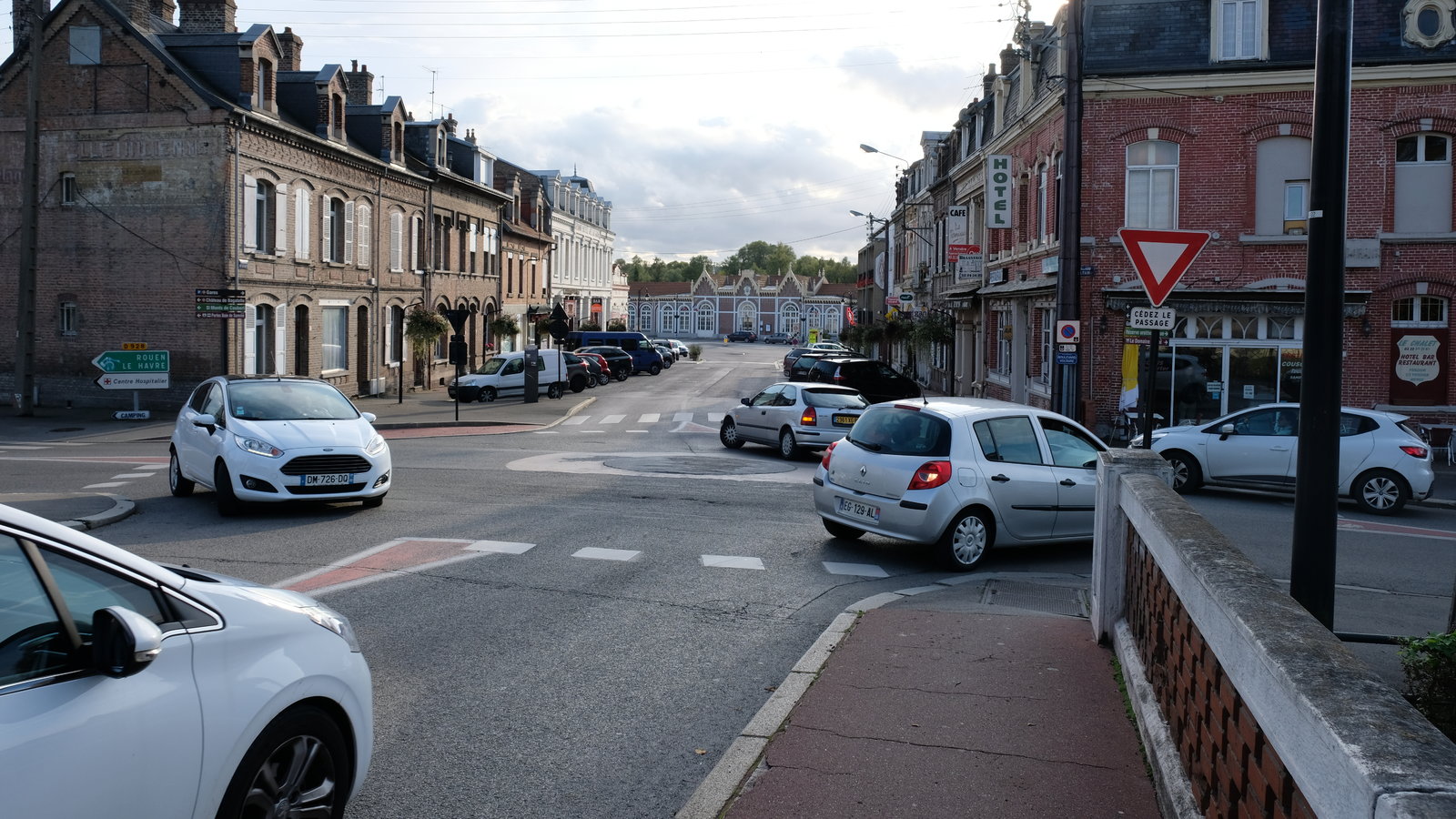 ABBEVILLE, France — Every day, about 65,000 vehicles cruise through the center of Abbeville, passing by its Gothic church, City Hall and rows of red brick houses, with many drivers on their way to the English Channel about a dozen miles away.

But they never stop for a red light. None exist in this town of about 25,000 people. Instead, drivers bank, swerve and loop their way through traffic circle after traffic circle.

Their ubiquity in Abbeville is an extreme example of France’s unabashed embrace of the roundabout, found in abundance throughout the country and widely credited for making roads safer and less clogged.

Even in Abbeville, on a recent morning, workers in fluorescent orange vests and hard hats were breaking ground on yet another traffic circle, as cars were backed up by the construction.

There are no official statistics, but estimates of the total number of traffic circles in France range from 20,000 to 50,000. In the United States — about 18 times bigger and five times more populous than France — the figure is closer to 5,000.

For some, the roundabout, a concept imported from Britain in the 1970s and quickly spread by the firm hand of the French state, embodies the unchecked spending of taxpayer money on pet projects by government officials, especially mayors, who in the 1980s took over road management from the central government.

Many officials “saw the roundabout as a kind of fashionable object,” said Éric Alonzo, a professor at the École d’architecture de la ville & des territoires in suburban Paris who has written a book on traffic circles.

“I heard from technicians who weren’t necessarily recommending that solution,” he said, “but elected officials were saying, ‘I want one.’”

For others, roundabouts are a constant reminder of an overreliance on cars and have come to symbolize deeper worries about French cultural identity, as urban sprawl and giant malls suck the life out of city centers, killing traditional bakers and butchers.

“Roundabouts have become the focal point that symbolizes, to the point of caricature, everything else’s flaws,” Mr. Alonzo said.

If there was anyone left in France who didn’t have an opinion about them, that changed last year during the Yellow Vest protests.

“The France of roundabouts” has even become the shorthand way to describe the small cities and towns in peripheral France, where many feel left behind, and where the Yellow Vest protests spontaneously started before migrating to Paris in what became months of often violent protests.

In Abbeville last year, some Yellow Vest protesters first gathered at one of the town’s biggest roundabouts, near a major shopping mall.

It was once the site of a sugar refinery so large that in May 1940, after German bombs set it on fire, 35,000 tons of sugar were transformed into caramel, sending residents rushing into the street with pots and pans to scoop up the precious syrup.

Like many of northern France’s former industrial powerhouses, all that remains today of that factory is a single, giant smokestack.

On a recent visit, there were no Yellow Vests in sight at the roundabout. Their protests have been tamped down by a combination of government concessions and police repression at protest sites. And the focus of worker anger in France has switched of late to the plans of President Emmanuel Macron to streamline the nation’s convoluted pension system.

Whatever anyone thinks of roundabouts as symbols of an ailing France, the residents of Abbeville concede that, in practical terms, they make life on the road easier. Even during the summer, with seaside-bound vacationers from around the region using the city’s streets and bridges over the Somme River, the roundabouts keep cars moving.

“I didn’t wake up one morning and say to myself, ‘What if I removed all the traffic lights?’” said Nicolas Dumont, the mayor of Abbeville. “It’s a very pragmatic policy.”

To cut down on the noise, traffic jams and fender benders occurring at one intersection, Mr. Dumont decided in 2010 to turn the troublesome spot into a roundabout. It solved the problems. Ten more traffic circles followed. In October, the city’s only remaining traffic light was sawed down.

Mélanie Cathelin, who runs a toy store on one of Abbeville’s main shopping streets, said she now finds traffic lights in other cities jarring, whether in neighboring Amiens or on a recent vacation in Florida.

Freddy Roger, a roofer sipping a beer at the Green Harp, a pub next to where the last traffic light once stood, said roundabouts used up “less electricity,” were “prettier” and safer.

“With a traffic light, it’s not just a minor accident,” he added, slamming one hand into the other. “It’s frontal.”

For one Abbeville resident, the absence of traffic lights was something of a professional hindrance. Christophe Blotas, a driving instructor, said he has to take his students to another town to teach them how to handle the red, green and amber.

There is no denying, Mr. Alonzo said, that the spread of roundabouts has given France’s roadways an air of visual uniformity, creating traffic features that look similar no matter where you are.

To counter that blandness, local authorities sometimes decorate traffic circles, but some of their choices have come under fire as aesthetically questionable, like a giant yellow arm adorned with careening autos, which burned last year after Yellow Vest protesters set fire to the camp they had set up in its shadow.

A roundabout in the eastern town of Pontarlier, where drivers are greeted by an oversized red face purporting to depict André Malraux, the French writer, was last year voted France’s “worst.”

But Mr. Alonzo said roundabouts were often unfairly blamed for the policies that produce them, like unrestricted commercial zoning on city outskirts that pulls in lots of traffic and creates a need for access ramps, parking lots — and multiple roundabouts.

“Let’s not throw the baby out with the bath water,” Mr. Alonzo said, arguing that roundabouts “have their relevance, but it all depends where and how.”

Love Is in the Air at L.A.'s 10 Most Romantic Hotels