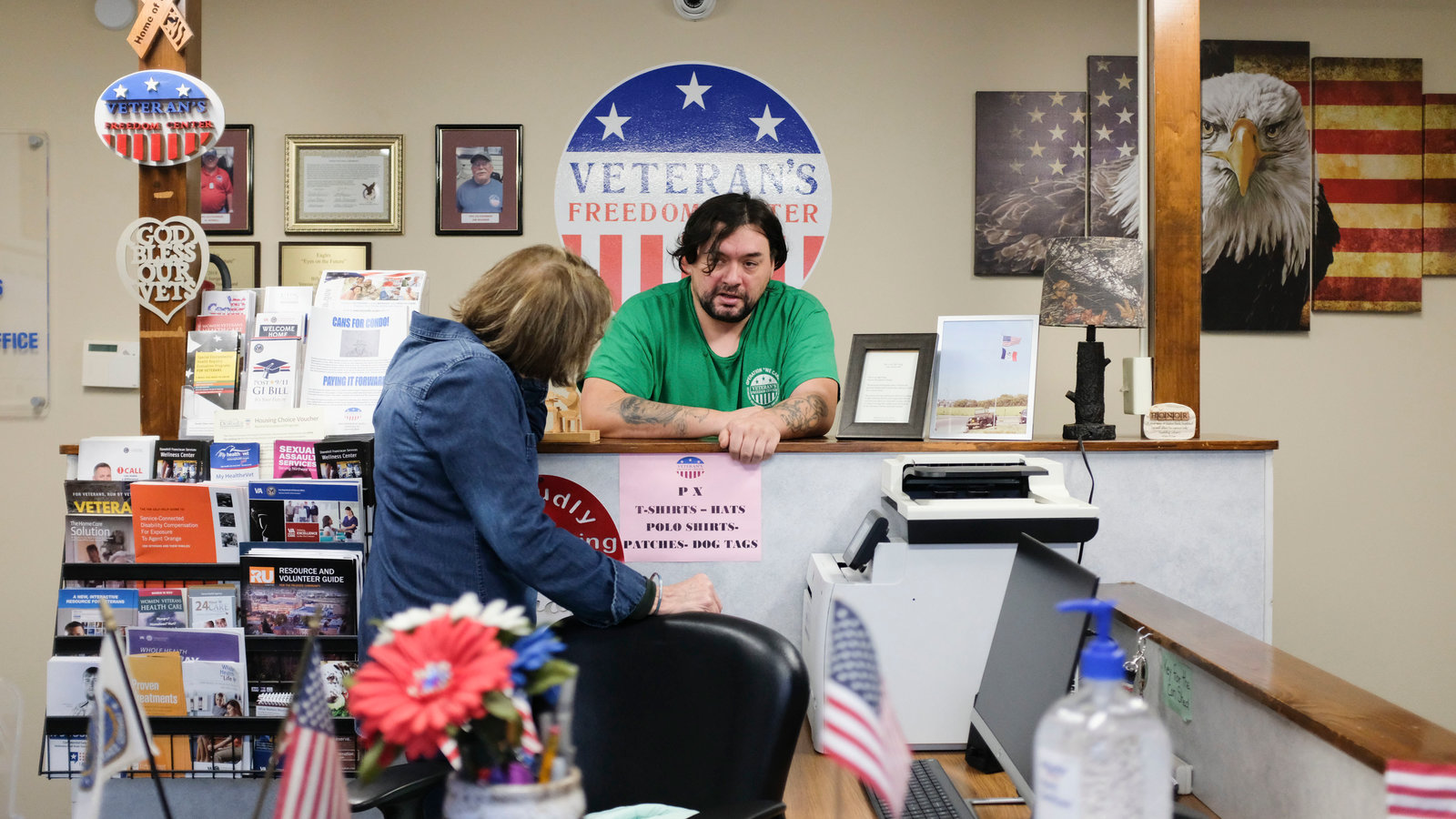 DUBUQUE, Iowa — Almost exactly four years ago, Donald J. Trump touched down at an airport hangar here, delivered a donation to a group that provides service dogs to veterans and, before inviting a few kids to run around on his Boeing 757, criticized the wars in the Middle East that many local families had sent their sons and daughters to fight in.

“I’m the guy that didn’t want to go to war,” he told a crowd of several hundred. “It’s just unjust, it’s a mess,” Mr. Trump went on, promising that if he ever did deploy the military anywhere, it would be “so strong, so powerful that nobody is going to mess with us anymore.”

That November, Dubuque County voted Republican in the presidential election for the first time since 1956, when Dwight Eisenhower was on the ballot.

Mr. Trump’s success in places like Dubuque — heavily white, working class, union-friendly and Catholic — remade the Republican electorate. And his path to a second term depends heavily on whether those voters turn their backs on the Democratic Party again.

But the specter of a new conflict in the Middle East — this time with Iran — threatens the political coalition that Mr. Trump built in 2016 by running against a national Republican Party that many voters came to see as indifferent and unresponsive, particularly when it came to the human cost of war.

Mr. Blume, who was raised in a Democratic household in New York and said he voted for Republicans and Democrats in presidential elections but did not vote for either Mr. Trump or Hillary Clinton in 2016, expressed fatigue with the president’s erratic style. If it weren’t for that, he would be less uncertain about voting for Mr. Trump, who he believes has done a better than expected job as president.

“He’s putting those kids in harm’s way,” Mr. Blume added. “What he says and what he does are two different things, and that’s what I don’t like about him.” (In fact, Mr. Trump did not always oppose going to war with Iraq as he has insisted; he initially expressed support for it after the invasion began in 2003.)

As tensions with Iran remain high, Mr. Trump risks becoming the wartime president he claimed he never wanted to be. And he has struggled to reconcile the inconsistencies in his foreign policy, leaving some voters wondering what he really is as a commander in chief: the president who crushed the Islamic State and will stop “endless wars,” as he claims, or a volatile decision maker who in the span of three months orders troops to pull out of Syria and then deploys thousands more to prepare for a possible conflict with Iran after taking out one of its top generals in a drone strike.

His provocations with Iran have further divided a country already exhausted by three years of constant political combat and chaos. “I just get heartsick with all this political tribalism,” said Ray Harrington, an Iowa National Guard veteran and self-described moderate Republican who served in Afghanistan. He is torn about the president’s recent moves, he explained one recent afternoon as he kicked up his feet on a chair in the kitchen of the Veteran’s Freedom Center in Dubuque, which provides resources and assistance to veterans.

Part of him wants to be over there, he said, alongside the troops. “But I get concerned. My son’s 18. He’s draft age,” Mr. Harrington added.

While Mr. Trump’s 2016 victory is often tied to his nationalist rallying cries to curtail immigration, restrict trade and restore America to a bygone “greatness,” one of the more overlooked pieces of the “America First” agenda he promised was his vow to end what he called “reckless, interventionist globalism.”

His contention that the political establishment was careless with American lives — just as he said both parties were indifferent to the suffering of middle-class Americans while pushing policies that helped almost everyone else, from big corporations to undocumented immigrants — was especially powerful.

The resonance was profound in Iowa and elsewhere across the Midwest, according to one study, where he broke through Democrats’ “blue wall” in Michigan, Wisconsin and Pennsylvania by a minuscule 77,000-vote margin.

One factor that helped put him over the edge in these states was the communities that have paid a steep toll from nearly 20 years of war.

The authors, Douglas Kriner of Cornell University and Francis Shen of the University of Minnesota Law School, then factored out demographic characteristics that tend to overlap with Mr. Trump’s base — race, level of education, income and population density. And they determined that even in counties predisposed to support Mr. Trump because they were more white, rural, poor and less educated, he still significantly outperformed Mr. Romney.

This not only helped Mr. Trump win the election, they concluded, but also could have decided the race. If casualty rates were only slightly lower in Pennsylvania, Michigan and Wisconsin, their model determined that all three states could have voted for Hillary Clinton.

“The parts of the country that have seen this war most intensely — they were looking for someone who would end the damn wars,” Mr. Shen said in an interview. “And in Trump they found someone who at least told them that’s what he would do.”

The way Mr. Trump talks about the cost of war and American foreign policy that preceded him echoes the other class-based divisions that have defined his populist political appeal.

In doing so, he expanded his party’s base of support, even as he upended decades of status quo among Republicans favoring a more active and heavy-handed approach to the use of American troops.

But his recent bellicosity toward Iran has unsettled some of his supporters who were drawn to the noninterventionist aspect of his “America First” promises.

“We were going to get out of these wars, focus on America first,” said Allen Chesser of Spring Hope, N.C., about 40 minutes from Raleigh. “That’s what I think everybody thought they were getting.”

Mr. Chesser, who served for 11 months in Iraq in 2005 and 2006 and returned to work in law enforcement before running an unsuccessful campaign for Congress, said he and others who took Mr. Trump at his word on foreign policy had become dismayed as the Republican Party largely fell in line behind him after the killing of Maj. Gen. Qassim Suleimani, the powerful Iranian commander.

“These are what you would call conservatives, they’re patriots. They’ve fought and paid,” he said. Now, he said, “because I disagree I’m somehow anti-Trump, which somehow makes me anti-Republican and lessens my patriotism? I don’t get it.”

The threat voters like Mr. Chesser pose to Mr. Trump is if they do not vote for a presidential candidate at all, or vote third party.

“These are not left-wing, antiwar people,” Mr. Kriner said. In the study on military casualties and Trump voters, he and Mr. Shen warn, “If Trump wants to win again in 2020, his electoral fate may well rest on the administration’s approach to the human costs of war.”

Some of Mr. Trump’s most prominent allies are warning him of the political risks inherent in escalating the conflict with Iran any further.

“It’s important that the president listens to his judgment here — that he doesn’t listen to the same people who got us sucked into Iraq in the first place,” Laura Ingraham, the Fox News host, said the other night on her program.

Others, like Ms. Ingraham’s Fox colleague Tucker Carlson, have noted with dismay Mr. Trump’s apparent reliance on advice from what they characterize as the same “deep state” intelligence officials he has said need to be purged from the government.

“If you say so, Mr. Unnamed C.I.A. official, I’m happy to send my kid to the Middle East a week after Christmas,” Mr. Carlson fumed on his program recently.

The risk in taking too provocative an approach with Iran is even greater because the political realignment now taking place between the two parties — with Republicans attracting more working class, white voters who once leaned Democratic, and Democrats appealing to higher-income Americans — is still in its early stages.

“That doesn’t mean,” Mr. Olsen added, “that the process is complete. And one way to stop the process or reverse it is to break faith on a core issue that Trump was an outlier on.”

Still, for those who have watched the political poles reverse in Dubuque over the years, there is a sense that Mr. Trump is retaining his hold on most of his voters.

At the Veteran’s Freedom Center, Jim Wagner, a 71-year-old veteran of the Vietnam War and a lifelong Democrat, said he could not fathom how anyone believed Mr. Trump when he said he would end the wars. “Trump is so way far out there, they think it’s cool,” he said. “They think it’s funny. See, I don’t.”

Democrats like him have made something of a comeback in Dubuque. In the 2018 midterm elections, a local Democrat who emphasized her family’s blue-collar, union roots, Abby Finkenauer, beat the incumbent Republican congressman in Iowa’s First Congressional District.

As Mr. Blume ordered another round at the American Legion, he considered the last three years under Mr. Trump. “He’s made my life better,” he said, citing the steady stream of contracting work he had been getting because of the healthy economy. “I haven’t lacked.”

Mr. Blume contemplated the possibility that Mr. Trump might get re-elected — and that he might even vote for him.

“It’s not going to be the end of the world,” he said, catching himself.

“Well,” he added, with a nervous laugh.