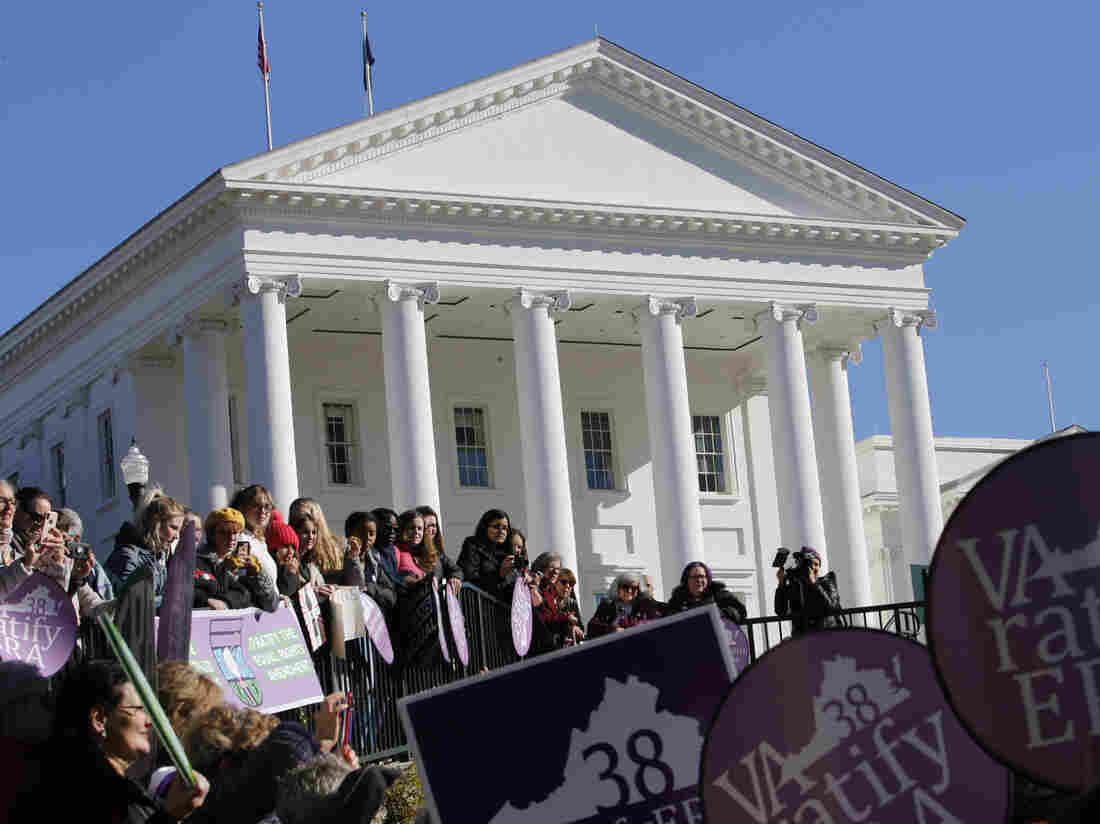 Equal Rights Amendment supporters demonstrate outside the Virginia State Capitol in Richmond on Wednesday, when the 2020 session of the Virginia Legislature began. 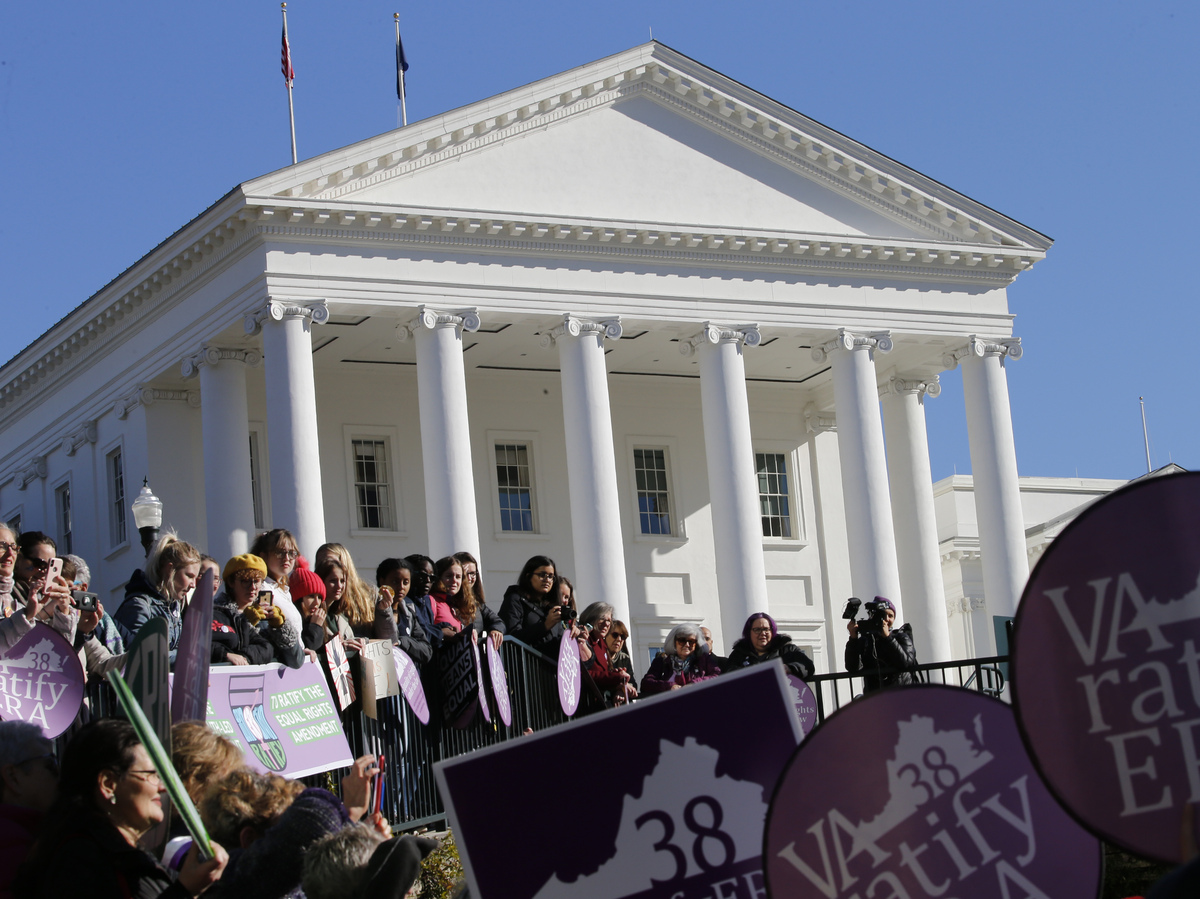 Equal Rights Amendment supporters demonstrate outside the Virginia State Capitol in Richmond on Wednesday, when the 2020 session of the Virginia Legislature began.

Many advocates for women’s rights are watching Virginia closely as the state’s legislature began its session Wednesday. They’re watching because the Equal Rights Amendment has a good chance of being ratified by Virginia lawmakers this year.

If the ERA passes there, Virginia would become the 38th state to ratify it; an amendment needs 38 states to be fully ratified and added to the U.S. Constitution.

But a curveball came from the U.S. Department of Justice’s Office of Legal Counsel on Wednesday, when it posted an opinion saying, “The ERA Resolution has expired and is no longer pending before the States.”

Legal experts say the opinion doesn’t kill this incarnation of the ERA, but it does mean the amendment now has another impediment to getting into the Constitution.

Here’s what the ERA would do and why its future is so murky.

What does the ERA say?

The main text of the Equal Rights Amendment being considered right now is pretty simple: “Equality of rights under the law shall not be denied or abridged by the United States or by any state on account of sex.”

There are additional sections laying out that Congress is responsible for enforcing the amendment and that it would go into effect two years after its ratification.

If Virginia ratifies the ERA, would it then be in the Constitution?

The answer is complicated.

To understand what’s going on with this new opinion, it’s important to understand a little about the constitutional amendment process. Usually, after 38 states ratify an amendment, the National Archives and Records Administration — led by the archivist of the United States — certifies it.

That office had asked the Office of Legal Counsel to weigh in on the ERA’s status. The reply: It considers the ERA “expired.”

The archivist will most likely follow that opinion, according to Stephen Vladeck, professor at the University of Texas School of Law.

“In practice, OLC opinions generally do end up being the view of the executive branch,” he said. “So when, as in this case, the archivist asks OLC for an opinion, it would be very unusual for the archivist not to take the advice he’s given.”

The OLC’s opinion counters multiple legal arguments that proponents have made in pushing the amendment.

One is a deadline attached to the amendment. Originally, the ERA, which Congress passed in 1972, had a deadline of 1979. That was eventually bumped out to 1982. But by then, only 35 states had ratified it. 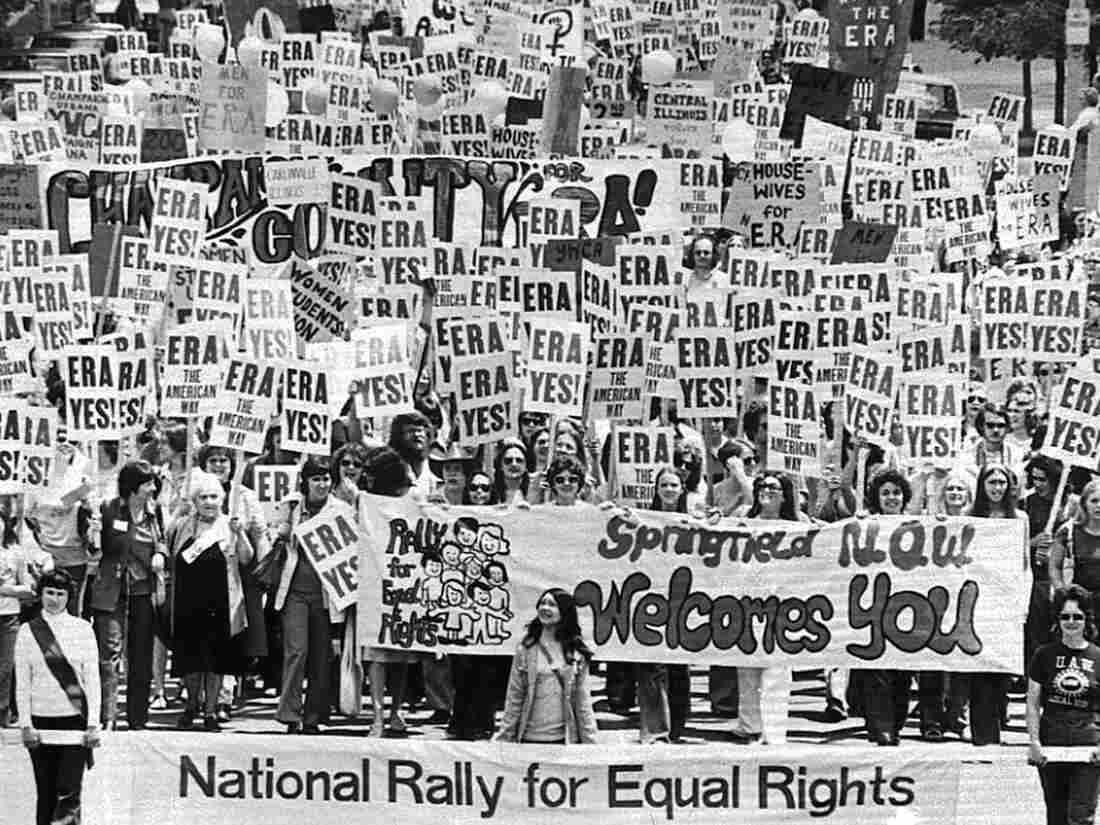 An estimated 10,000 marchers descend on the Capitol building in Springfield, Ill., to demonstrate for the state’s passage of the Equal Rights Amendment on May 16, 1976. 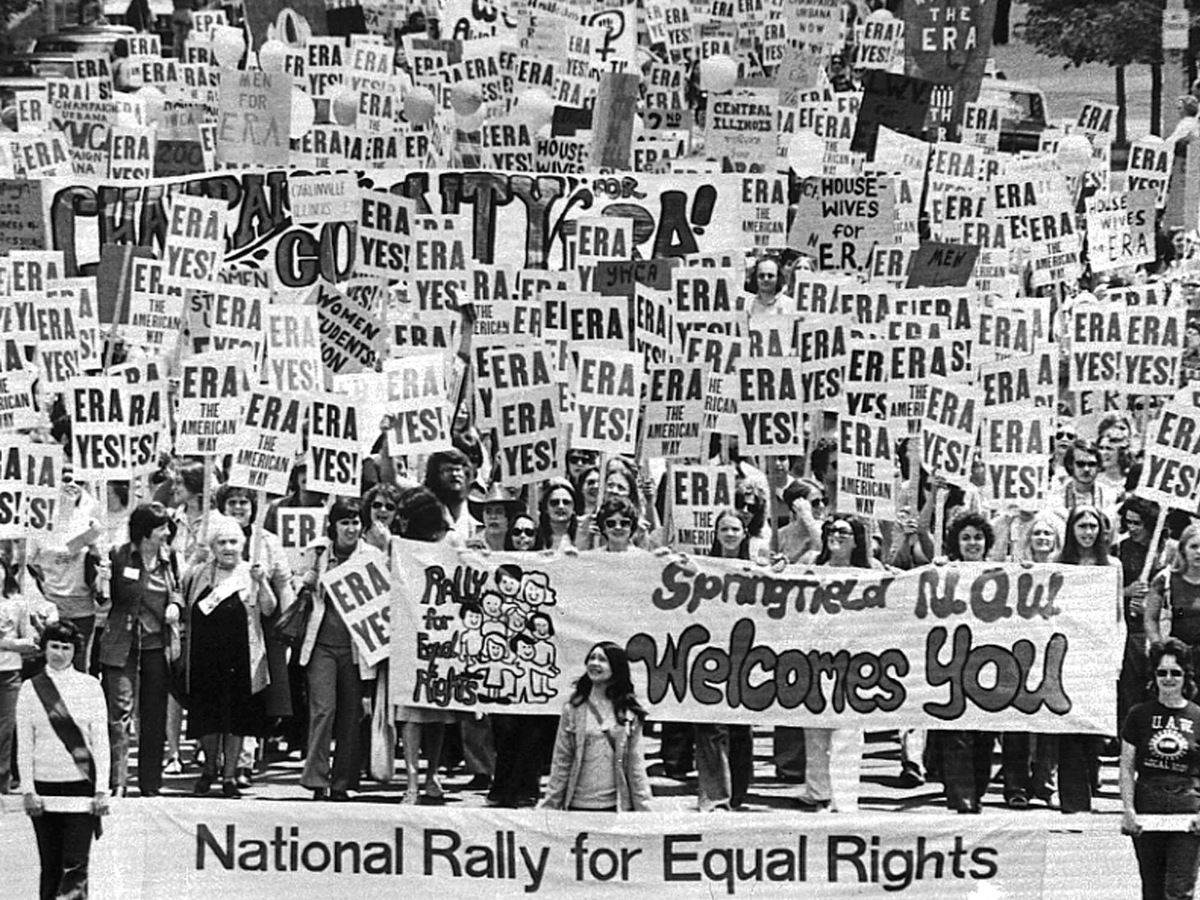 An estimated 10,000 marchers descend on the Capitol building in Springfield, Ill., to demonstrate for the state’s passage of the Equal Rights Amendment on May 16, 1976.

A looming question right now is whether that 1982 deadline still counts.

Some supporters argue that because the deadline is in the preamble that proposes the ERA — not the text of the amendment itself — the deadline doesn’t have to be observed. So without a deadline, just three more states were needed for ratification. This became known as the “three-state strategy” for passing the ERA.

There’s also an argument that Congress has the final say and that it can remove that deadline. Democrats in the House and Senate have introduced legislation this session that would do that. But there isn’t legal consensus that this would work, and opponents have seized on this lack of clarity.

The OLC addressed both of these arguments in its opinion:

We conclude that when Congress uses a proposing clause to impose a deadline on the States’ ratification of a proposed constitutional amendment, that deadline is binding and Congress may not revive the proposal after the deadline’s expiration.

In addition, three states — South Dakota, Alabama and Louisiana — in December filed a federal lawsuit seeking to block the amendment.

One of their arguments is that five states have tried to take back their ratification — a move called rescission.

There are also legal questions about this. Supporters of the ERA point out the Constitution also doesn’t explicitly say that rescission is allowed. The OLC declined to weigh in on this: “[I]t is unnecessary for us to consider whether the earlier ratifications of the ERA by five state legislatures were validly rescinded.”

(For a much fuller explanation of the legal arguments, read this thorough report from the Congressional Research Service, last updated in December.)

So does this new opinion kill the ERA?

Should Virginia ratify the amendment, “it’s not hard to imagine a lawsuit claiming Virginia’s ratification renders the ERA ratified for purposes of Article V of the Constitution,” Vladeck said.

That lawsuit could come from a state itself, Vladeck said, and could eventually wind up before the Supreme Court, if justices agree to take it up. 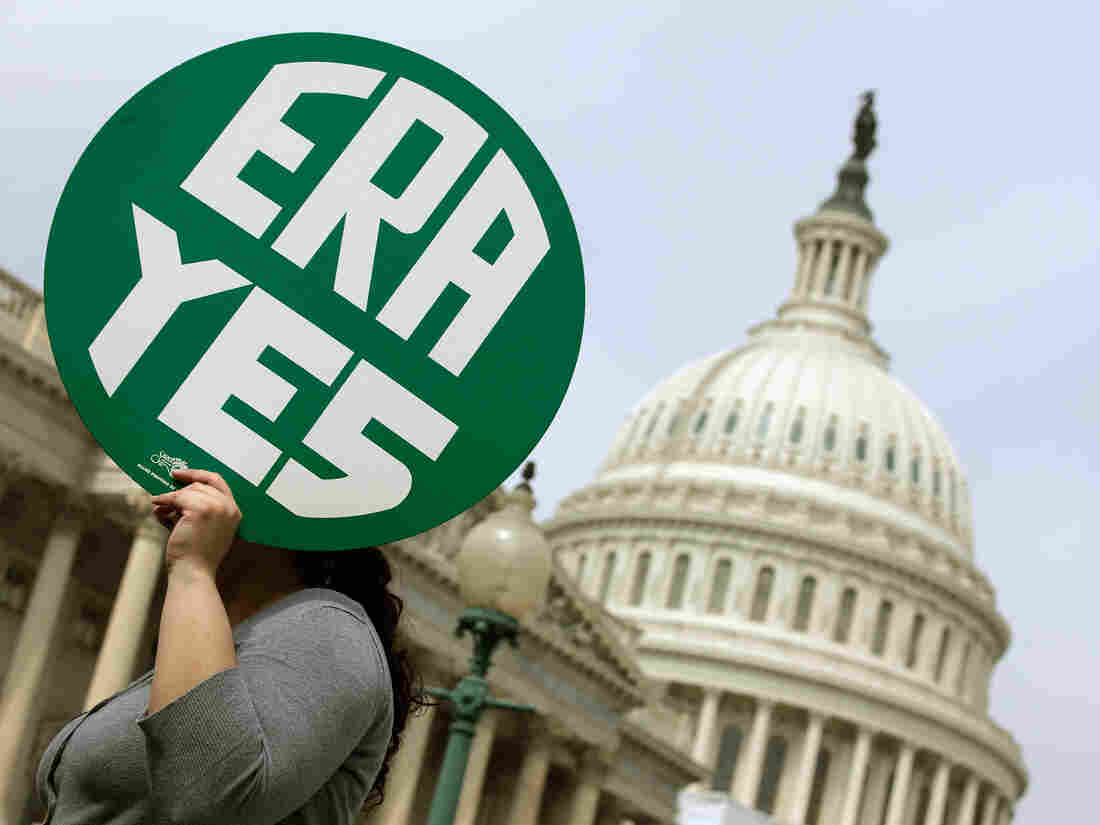 A woman holds up a sign as members of Congress and representatives of women’s groups hold a rally to mark the 40th anniversary of congressional passage of the Equal Rights Amendment outside the Capitol in 2012. 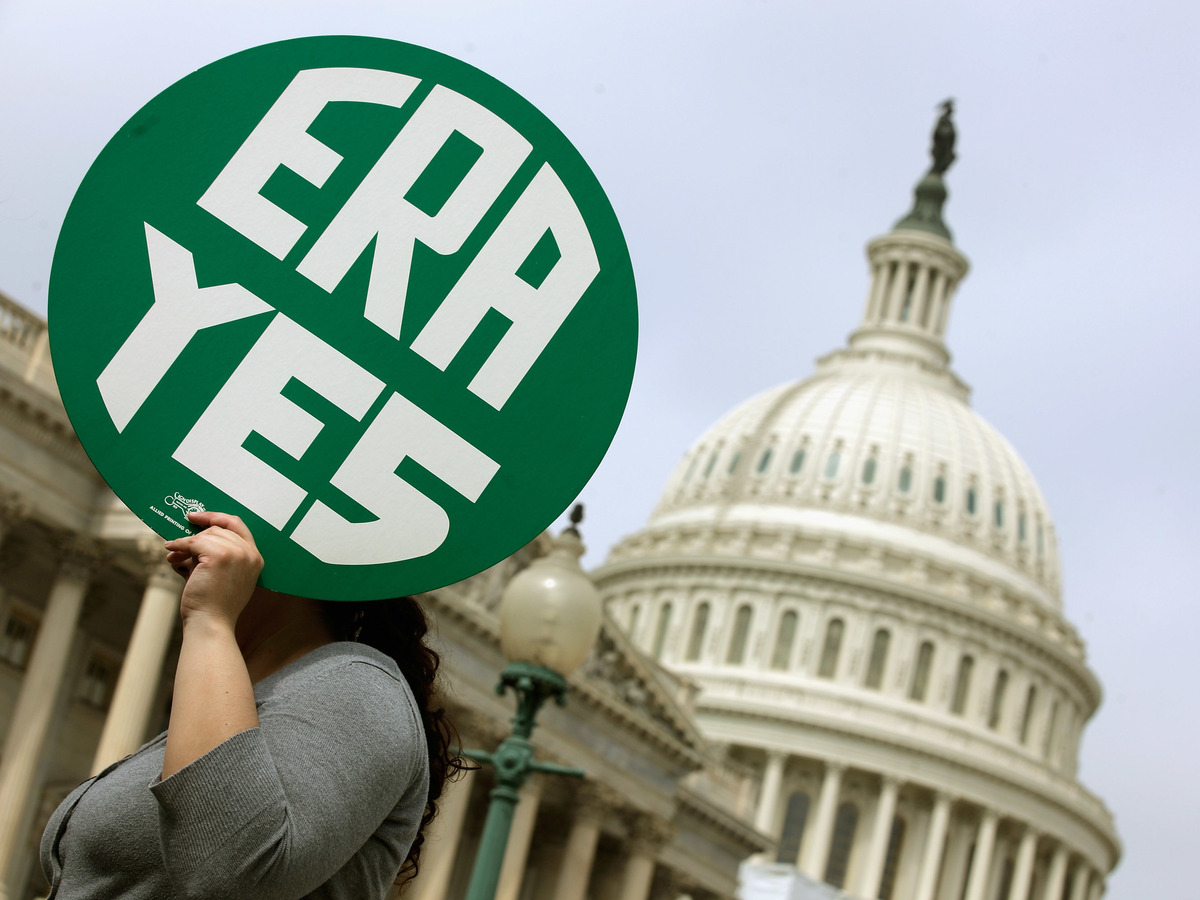 A woman holds up a sign as members of Congress and representatives of women’s groups hold a rally to mark the 40th anniversary of congressional passage of the Equal Rights Amendment outside the Capitol in 2012.

“A court might well deviate from the OLC and reach a different conclusion about the viability of the ERA,” she said. “A federal judicial ruling would trump the OLC opinion.”

What exactly would the ERA do?

OK, back to the ERA itself. It would explicitly put the idea of equal rights by sex into the Constitution. Legal scholars say that could raise the standards for whether a law that discriminates based on sex is constitutional.

That could mean increased protections in several areas, including pregnancy discrimination, according to Northeastern’s Davis.

In addition, proponents often argue that the ERA would help women get equal pay and that it would help victims of gender-based violence seek justice.

Conservative opponents often raise fears that the ERA would lead to the types of laws (or legal interpretations) that they oppose, particularly on issues like abortion. Meanwhile, some ERA proponents cite it as an important protection for abortion rights. (However, some proponents question whether this is a smart strategy, as Stephanie Russell-Kraft reported in the Daily Beast in 2018.)

State-level ERAs have been cited in cases protecting abortion funding, as was reported in 2019 in The Arizona Republic.

However, that doesn’t necessarily predict what would happen under an ERA in the U.S. Constitution.

“There certainly would be the opportunity to argue about abortion under the Equal Rights Amendment, but it’s not clear how that would come out,” Davis said.

Finally, proponents argue that there would be an important messaging value to the Equal Rights Amendment.

“At the level of principle, I think just to send the message out that 200 years after the Constitution was written and women were intentionally left out, we want to correct the record and make it very, very clear at the highest level of our law that women are no longer second-class citizens and should be treated with respect and equality,” said Jessica Neuwirth, president of the ERA Coalition.

I thought the ERA was a thing back in the 1970s. Why is it being debated now?

In fact, it has been around even longer. Women’s rights activist Alice Paul pushed an Equal Rights Amendment in the early 1920s, and it was first introduced in Congress in 1923.

However, getting the ERA further took a while. It wasn’t until 1972 that Congress passed it and sent it on to the states for ratification.

And then when no more than 35 states ratified it by the 1982 deadline, the ERA appeared dead. When it became clear it wouldn’t succeed that year, the president of the National Organization for Women told reporters that the group would ”not again seriously pursue the ERA until we’ve made a major dent” in promoting women and feminist men in state legislatures, as The New York Times reported at the time.

Some proponents continued to advocate for it, however. While some pursued the “three-state strategy” explained above, some said they wanted to start over entirely with the ratification process.

In 2017, three-state proponents gained new ground. That year — 40 years after the ERA had last been ratified by a state — Nevada became the 36th state to ratify it. And in 2018, Illinois became the 37th. Now Virginia may be the 38th.

How politically divisive is the ERA? 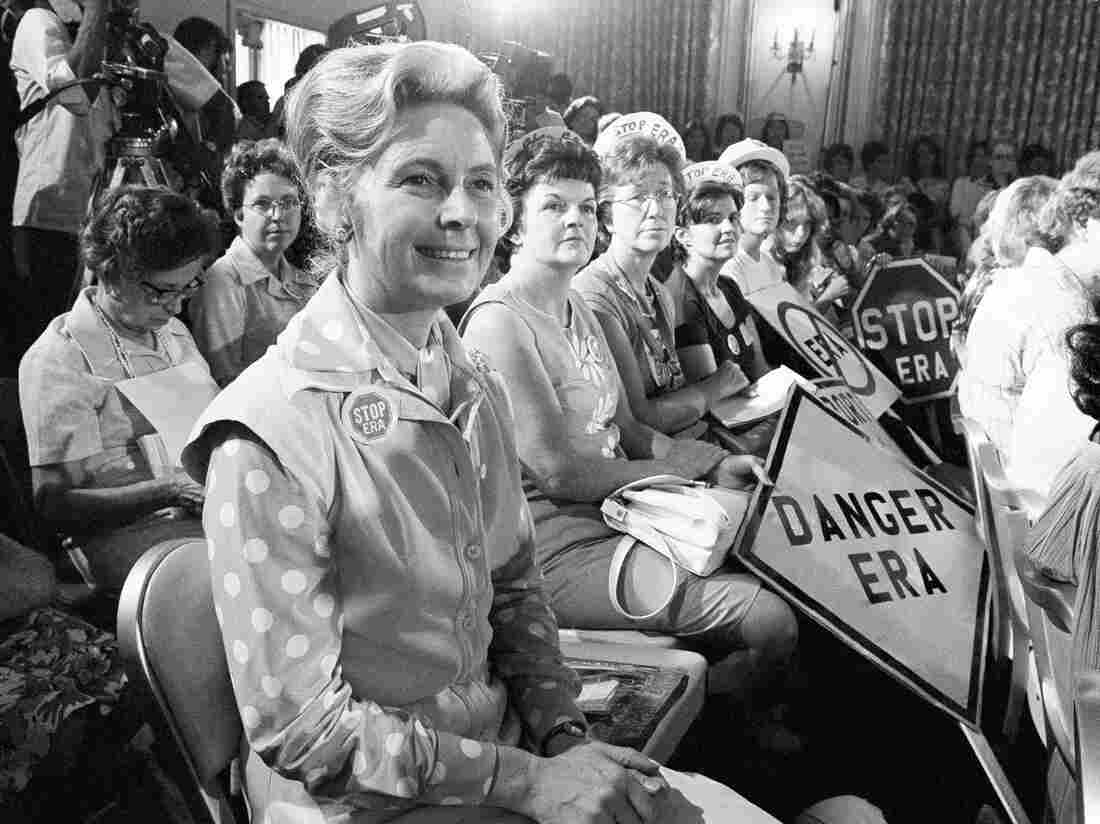 One of the leading opponents of the ERA during the 1970s was conservative Illinois lawyer Phyllis Schlafly, who launched a campaign called Stop ERA and is credited with helping mobilize public opinion against the amendment in some of the states that balked at ratifying it. 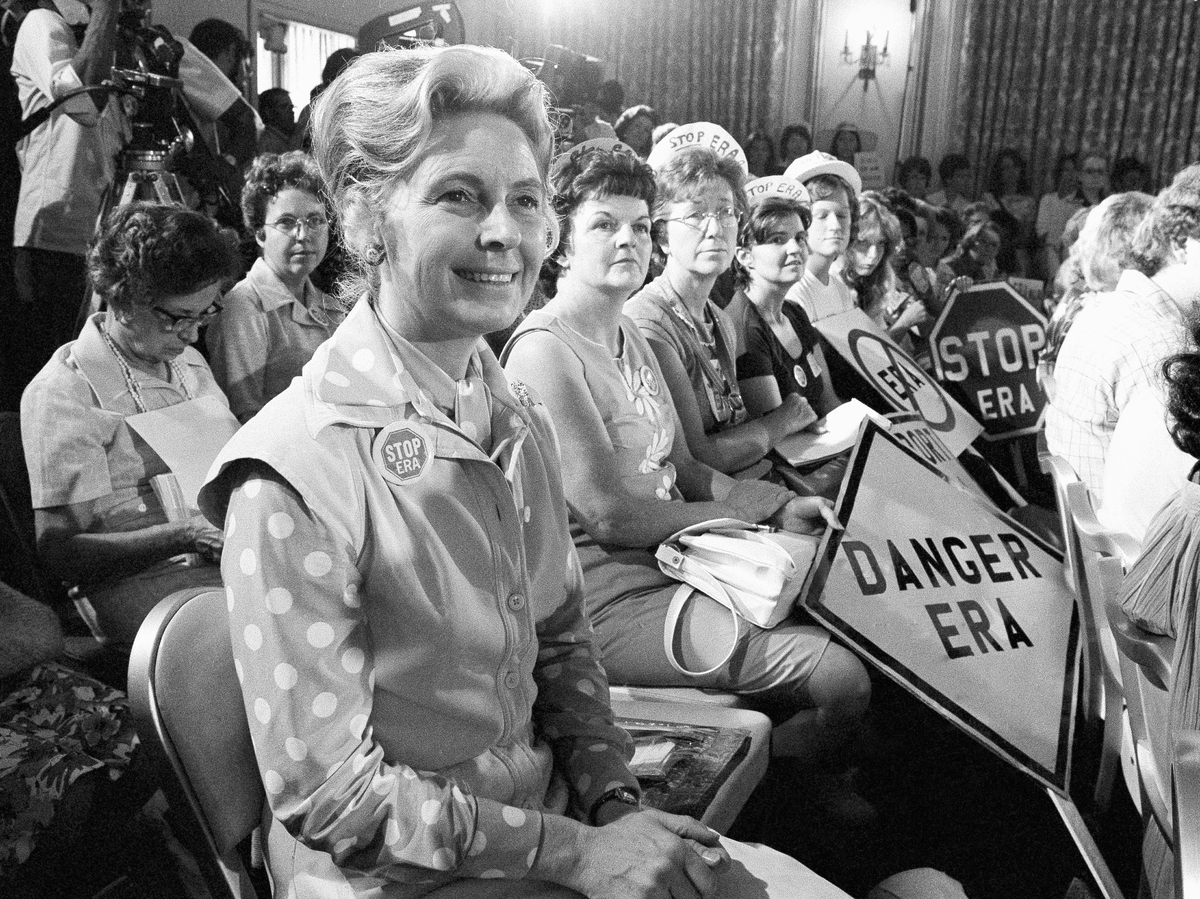 One of the leading opponents of the ERA during the 1970s was conservative Illinois lawyer Phyllis Schlafly, who launched a campaign called Stop ERA and is credited with helping mobilize public opinion against the amendment in some of the states that balked at ratifying it.

When it was proposed, in 1972, the ERA had broad backing in Washington. It easily passed both houses of Congress (84-8 in the Senate and 354-24 in the House) with bipartisan support.

But a conservative movement against the amendment, led by lawyer and activist Phyllis Schlafly, helped stir opposition by the time its deadline rolled around.

The amendment has proven more popular among Democrats than among Republicans in recent years, but there is still at least some bipartisan support.

For example, seven Republicans joined Democrats when the Virginia Senate passed the ERA last year. And in the U.S. Senate, both Alaska Republican Lisa Murkowski and Maine Republican Susan Collins have said they support the amendment.