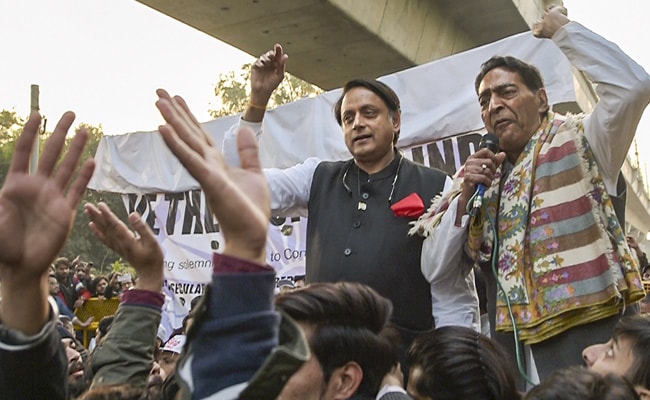 "You are an inspiration to every Democrat in the country. We stand by you, we stand by the courage you showed. We stand by the spirit and belief you have in the Indian Constitution. This is a struggle for everyone "Congress MP said at Jamia.

"The party stands with the students and is against the Citizenship Change Act and the National Citizens Register," he said. Mr. Tharoor was accompanied by Subhash Chopra, President of the Delhi Congress, and former MLA Mateen Ahmed from Seelampur.

Later, Mr. Tharoor tweeted, "It was fabulous to see the courage, passion and determination of Shaheen Bagh's women. Including the non-Egyptian & # 39; Dadis & # 39; who were quick from the start. They all became addressed with great admiration. "

"It is a pleasure and a privilege, dear friends of @jamiamillia! Stay strong. We are with you. @INCIndia," he tweeted.

He took the subway to JNU and stood there with students who were attacked by a masked mob last Sunday.

Message to the JNU students waiting for me: Decided to stop traffic near ShaheenBagh and instead take the subway to get to you. It'll be late, but not as late as if I'm holding onto four wheels! See you soon! We look forward to our interaction. pic.twitter.com/t68zW8Iqsp

At JNU, Tharoor condemned the mob attack, in which masked thugs wearing iron bars and sledgehammers entered the campus and did a three-hour unchecked rampage that injured students and teachers.

Mr. Tharoor also spoke about the Citizenship Act and said it was the first time that a religious test had been introduced into the definition of Indian citizenship. "Never before in our country did it matter which religion you had to be an Indian citizen. The fact that this government does not understand that is the greatest shame of all," he was quoted by the PTI news agency.

For almost a month now, protests have been raging in Shaheen Bagh in Delhi, which received national attention when demonstrations broke out across India over the Citizenship Amendment Act, which critics say is anti-Muslim.

More than 200 women have sat and slept on a four-lane street connecting Delhi and Noida, while hundreds of women have joined the street every day to protest the controversial law that applies to Hindus, Buddhists, Sikhs and other minorities, who have fled neighboring countries give the right to Indian citizenship – but exclude Muslims.

Shaheen Bagh women took the street after police brutally cracked down on a demonstration by students at nearby Jamia Millia Islamia University last month that violated the Citizenship Act, which for the first time in India made religion a criterion for citizenship makes.

Prime Minister Narendra Modi and the ruling BJP have insisted that the law is "humanitarian" and that Muslims do not have to worry, but the opponents are not convinced and have held rallies across the country – often with police forces.

(With input from PTI)

US President Donald Trump defends the name of the corona virus...