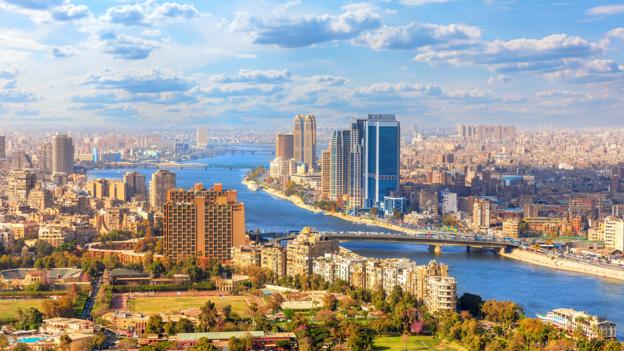 Founded in 969AD, modern Cairo may seem young in comparison to the 4,500-year-old pyramids just across the Nile. But the city has seen its own share of history in its lifetime, including occupations by the Ottomans and British and revolutions that changed the course of the country.

Cairo and the region’s history – new and ancient – will soon be on display at the Grand Egyptian Museum, the largest museum in the world dedicated to a single civilisation. Located just 2km from the Great Pyramids, the museum (set to open in 2020) has locals excited to experience more of their own history and share the treasures of the ancient Egyptian civilisation with new visitors.

“I know that I will be able to see some amazing masterpieces for the first time in my life, as many have previously been kept in storage and now will be displayed at the new museum,” said Sayed Abed Al Razek, a local guide for Osiris Tours in Cairo. “Locals like myself are also really looking forward to the opening as it will increase tourism, which in turn will aid the Egyptian economy.”

You may also be interested in:
• What’s it like to live in an over-touristed city?
• China’s ancient city that’s luring expats
• Living in a country that thinks green

Abed Al Razek and other locals see the museum opening as a chance to reintroduce the world to Cairo, a city that has seen tourism dwindle since the 2011 Egyptian Revolution that caused the removal of long-time ruler Hosni Mubarak. Beyond the museum itself, residents are eager to share why visitors should come back to Egypt’s sprawling capital and why they love living there.

Why do people love it?

With more than 20 million people living in the metro area, Cairo has “an energetic pulse”, according to Lauren K Clark, an American writer who has lived in Cairo since 2010. She attributes the city’s energy to the varied cultures, social classes and natural environment found here, explaining that each part of the city has its own vibe and culture where these facets shine.

“You have the modern, upbeat, club side. You have the rural, green, lush pastures side. You have the side where you feel like you are in the ancient times,” she said. “And the fascinating thing is that Cairo has managed to sustain all these different entities. This is the magic and wonder of the city.”

The fascinating thing is that Cairo has managed to sustain all these different entities. This is the magic and wonder of the city

Australian expat Dana Hooshmand, who blogs at Discover Discomfort, agrees that the city has a uniquely exciting buzz. “You walk out the door in Cairo and are greeted suddenly with 1,000 vehicles weaving through each other like ants, the sound of hundreds of horns honking, people weaving through the traffic selling bread snacks from baskets on their heads, and donkey carts piloted by the Zabbaleen [garbage collectors] hauling trash,” he said. “It’s overwhelming, but you can’t help but feel alive.”

The food scene here has seen a renaissance since 2011, with a glut of new restaurants. “Some are inspired by global tastes, while others hearken back to their traditional roots,” said Abed Al Razek. He pleads that no-one leaves Egypt without trying “at least a few bowls” of koshary, Egypt’s hearty national dish that combines spiced lentils, savoury rice, chickpeas, fried onions and macaroni, topped with a vinegary tomato sauce.

Clark also suggests visitors travel to Maadi, a southern suburb of Cairo, to check out Road 9, a street lined with restaurants serving everything from sushi to Egyptian street food. “I call this street ‘The street of culinary dreams’, because it is truly that,” she said.

Residents say that anyone moving to Cairo should be prepared for the bustle of a big city. Although new infrastructure and development projects are widespread and can cause some delays getting around, there’s no shortage of ways to navigate the metropolis.

“I love, love, love the accessibility to transportation. I love that I can stick my hand out to get a taxi, or take the bus, a tuk-tuk, train or Uber,” Clark said.

Getting around is affordable too; monthly transportation costs are on average 250% lower than they are in London, according to price comparison site Expatistan.

Residents also recommend taking a laid-back attitude toward life in Cairo, as things might not always go according to plan.

“If you go in with one way of thinking, like a fixed schedule or particular structure of organisation, you will be very disappointed,” said Clark. “Cairo teaches you to just go with the flow and to savour the lessons learned along the way.”

Speaking Egyptian Arabic can help newcomers navigate. “Cairo is cosmopolitan, and you can get by on English,” said Hooshmand. “But you’ll have a lot more fun if you know Arabic.”

As famous as the ancient past here is – including the Al-Azhar Mosque that dates to 972AD and the Coptic part of the city where Roman towers still stand and churches host early Christian art – locals also want to be known for what they are bringing to the present. “The people of Cairo, and Egypt as a whole,are putting positive and healthy images of Egypt into the world,” said Clark. “They are competing, elevating, and want to show their ability to bounce back and reclaim a more vigilant presence on the world stage.”

As part of this, the new government has embarked on an ambitious plan to rebuild the capital 45km east of Cairo in an area currently called the New Administrative Capital. The plan includes creating a “smart city” with cashless transportation payments and abundant parks and greenery covering an eventual 700 sq km, but funding shortages have caused numerous delays in progress.

What else do I need to know?

Despite the economic progress, harassment of women remains a problem in Cairo. A 2013 UN study reported that 99.3% of Egyptian women have experienced some form of harassment. “Egypt was already the worst place in the Middle East for harassment, and it still is,” said Hooshmand.

Women in the city are fighting back, however. Local women’s rights activists have created resources like the HarassMap – an interactive map that lets women report incidents as well as when someone intervened to help – to end the stigma around reporting and bringing more accountability to harassers.

While residents are honest about the current challenges facing the community, Hooshmand says Egyptians are vocal about problems because they believe the country can change.

“They think the future can be bright,” Hooshmand said. “And provided [there are] systemic changes, Egypt can maybe reach even greater heights than it ever did in the past.”

Living In is a series from BBC Travel that discovers what it’s like to reside in some of the world’s top destinations.

If you liked this story, sign up for the weekly bbc.com features newsletter called “The Essential List”. A handpicked selection of stories from BBC Future, Culture, Worklife and Travel, delivered to your inbox every Friday.

People are seeing ‘Cats’ while high out of their minds. These...